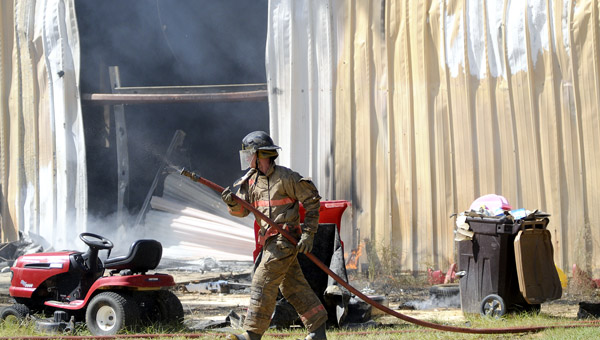 A firefighter adjusts his position while fighting a fire on County Road 1107 in rural Pike County. (Messenger Staff Photo/Thomas Graning)

When Pike County resident Jessi Sleasman left his County Road 1107 home Friday morning, he had no idea he’d be returning so quickly.

But when a neighbor heard loud explosions around 10:30 a.m., Sleasman was called back to his property.

“It sounded like a cannon going off,” said Leonard Helton, who heard the sounds of truck tires exploding and soon found other neighbors trying to salvage Sleasman’s belongings from the shed, which was quickly engulfed inf lames.

“I told the boys to get away from it. Things can be replaced but not bodies. Thankfully, no one got hurt,” said Helton.

Sleasman returned around 11 a.m. and quickly surveyed the damage caused by the fire. He said the only objects using electricity in the shed were a deep freeze and a radio. He believes one of those two items must have “shorted out,” igniting the fire that found plenty of fuel to burn. “There were clothes piled up in boxes, tools, four-wheelers, propane tanks, grills, and welding equipment inside the shed,” Sleasman said.

Adjacent to the work shed was a light pole that attached to the house. The South Alabama Electric Company arrived on the scene to shut off the power.