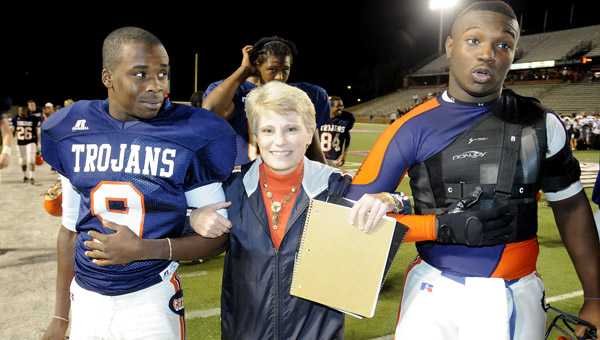 A goal that had been set shortly after the 2009 season had ended was accomplished Friday night at Veterans Memorial Stadium.

At the time, Charles Henderson rising seniors Corey Dennis and Quintus Moss, among others, held a players only meeting with the returning members of the Trojan squad, with the main point of the conversation being about having a better season the following year, specifically, making the playoffs.

With the Trojans 28-7 win over Carroll Friday night, CHHS secured its spot in the postseason for the first time in two seasons.

“This was one of our goals, but not the only one. We wanted to go further than last year’s team and we were able to accomplish that (Friday night).

The win improved the Trojans to 5-3 overall and 4-2 in region play, while the Eagles remain winless at 0-8.

“It was ugly at times, but we still got the win,” head coach Hugh Fountain said, “we still got to get better, we didn’t play particularly well in the first half, but that’s part of the game.

“There were a lot of stupid penalties (in the first half) that really slowed us down,” the coach said.

“We can’t have penalties and turnovers like we had (Friday night) if we want to be the kind of football team I know we can be.”

At first, the game looked as if it was going to be a high-scoring affair, as both teams scored on their respective first possessions.

Eagle quarterback Ronnie Peterman scored on a seven-yard scramble, giving Carroll its only lead of the night.

The Trojans would respond with a 10-play, 75-yard drive that ended with a three-yard run by Moss to tie things up at seven all.

The rest of the first half would remain scoreless, as both offenses struggled to gain any ground.

A block in the back penalty negated a Dennis to Jeffrey Barker 67-yard touchdown pass that would have CHHS given the lead early on in the first quarter.

In the second half, right from the start, the Trojans imposed their will on the Eagles.

After a Laquavious Bryant 96-yard kick off return for a score was taken away by another block in the back penalty, CHHS found the end zone the old fashioned way, going 49 yards in nine plays, as Dennis found Bryant for a 12-yard pitch and catch touchdown.

The Trojans would get the ball back immediately on the ensuing kickoff after Carroll let a Nathanael Salmon pooch kick hit the ground with CHHS recovering.

Just three plays later, Barker would again find the end zone, this time with the touchdown standing, after a 14-yard run.

On the very next CHHS possession, Barker would again hit pay-dirt, this time scoring from 10 yards out, to give the Trojans a comfortable 28-7 lead in the third quarter.

“We came out of the break focused,” Fountain said about his team’s third quarter play.

“(The coaches) stressed to the guys about playing smart and just playing better. You got to give (Carroll head coach Chad Lapp) and his team a lot of credit, they played hard. They have been playing hard all season long. But our guys are a hard fighting team, and I’m glad to see us in the position we are in right now.”

The Trojans finished with 351 total yards, with the majority coming on the ground.

Moss led the way with 13 carries for 121 yards and a touchdown, while Dennis finished with 12 carries for 93 yards.

“We didn’t have any worries,” Moss said about the Trojans early offensive struggles.

“We knew we were going to come through, it was just a matter of time.

“This feels a whole lot better than last year,” the senior said with a smile.

The Eagles finished with 274 yards, with Peterman adding 191 through the air and another 33 on the ground.

“Defensively, we have struggled all season long, but to hold Carroll to just seven points is a confidence booster for us,” Fountain said.

“As a team, we have relied a lot on our offense this season, but I think this is a game that we will be able to build off of for the next couple weeks of the regular season before the playoffs – we got a big one next week though in Eufaula.”