No time for tears 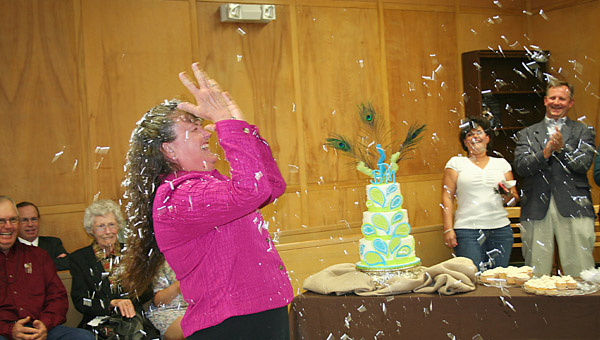 Brenda Peacock fought back tears at her retirement celebration on Friday afternoon, as did the hundreds of well-wishers who came to the Pike County Courthouse to honor her. Joyous moments marked the event, as well, including a dousing with "water" from a deputy in the clerk's office. (Photo/Jaine Treadwell)

Brenda Peacock said she wouldn’t cry when she stepped down as Pike County’s circuit clerk on Friday. She almost didn’t.

Peacock held back tears as she expressed appreciation to the “girls” in the circuit clerk’s office who “have made me look better than I am.”

“I will be eternally grateful to my ‘sisters,’” Peacock said. “And to all of the people at the Courthouse. It has been my second home. I’ve been here since I was 17 years old, and it’s been fun.”

Peacock thanked all of those at the Courthouse who have made her job such a pleasure and to the people that she has served.

But on Friday, Oct. 15, 2010, it was the retiring circuit clerk who was deemed “the best ever” by all those who packed the Pike County courtroom for the reception in her honor, from the niece who hugged her knees to the deputy who doused her with “fake” water and the circuit judges who hold her in such high esteem.

Circuit Judge Thomas Head has worked with Peacock at the Pike County Courthouse for 24 years and six years prior to that at the DA’s office.

“Brenda Peacock is probably the single most dedicated public servant that I know,” Head said. “She makes us all proud because she sets the standard – sets the bar – for all elected officials. She will be missed and she cannot be replaced. And those are not just words. They are the truth.”

Jamie Scarbrough has been in the circuit clerk’s office for 15 years and will step into Peacock’s shoes.

“I’m confident that I can do the job but the hardest thing – the thing that scares me the most – is trying to fill the shoes of someone who is loved by everybody,” Scarbrough said. “Brenda is such an exceptional woman. She is not the average politician. She doesn’t put on airs. She’s just who she is and that’s what makes her so exceptional.”

With a smile, Troy Mayor Jimmy Lunsford said Peacock is just another example of the “exceptionally” good stock that comes from the Needmore community, which is the mayor’s home place.

“We are proud of Brenda and proud for her that, at such a young age, she can retire and enjoy her grandkids and life,” he said. “She has done a super job as our circuit clerk and we want to congratulate her on a job well done.”

Revenue Commissioner Curtis Blair said Peacock is a stone – yet a happy one.

“We have worked together for 32 years and every day has been a pleasure,” Blair said. “Brenda is a team player and everyone enjoys working with her because she is always happy and can always be counted on. She’s is a stone in the circuit clerk’s office.”

“Back when we had to take warrants to Brenda’s house on Saturday mornings for her to sign, she was always smiling and she wouldn’t let us leave without giving us a jar of blueberry jelly,” Williamson said. “That’s just the kind of person she is.”

Sonny Schrieber, an investigator with the Troy Police Department, said simply that Peacock is a “doll.”

“Brenda is always smiling,” he said. “It doesn’t matter when she’s called out, Saturday, Sunday or in the middle of the night. She is always willing to do what has to be done. And she is a true advocate for victims. There’s nothing bad that can be said about Brenda Peacock. She’s a true friend and I hate to see her go.”

Peacock has been a “big sister” to Pike County Sheriff Russell Thomas and serving with her has been “an honor and privilege,” he said.

“I’ve learned a lot about the law from her but there are two things that I especially admire about Brenda,” Thomas said. “First, it’s her love of family. She always puts her family first and then it’s her desire to do the best job possible. Brenda exemplifies what public service is all about. When you needed her, she was always accessible. She’s fair and honest. She’s one of a kind and she will truly be missed.”

Scarbrough will be sworn in as Circuit Clerk at 8:30 a.m. Monday.