A wish ‘to feel normal’ 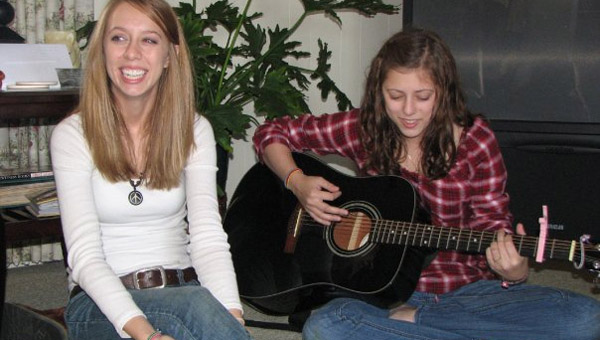 Cassie Buffy, right, and her sister, Christian are best friends, whose time together helps the Pike County teen cope with the daily struggles of life with cystistic fibrosis, a debilitating disease. Cassie says her one wish in life would be to know just one day with a "normal body." They are attending Wallace Community College in Dothan, where Cassie is studying cosmetology. (Submitted Photo)

If Cassie Buffy could have anything in the world that she wanted, it would be to know for “one day – just one day” what it feels like to be a “normal body.”

Cassie was diagnosed with cystic fibrosis when she was five months old. But it wasn’t until she was 10 years old that she really realized what a terrible disease it is.

Most children misspeak the disease and say instead, “sixty-five roses.”

“What a beautiful name for such a terrible disease.”

Cassie said although the disease is terrible, life is beautiful – as beautiful as “sixty-five roses.”

“That’s why I got the tattoo,” Cassie said. “It’s a purple ribbon with a rose in the middle that is a symbol of ‘sixty-five roses,’” she said. “When I was thinking about getting a tattoo, I didn’t want some random tattoo. I wanted one that meant something. I wanted something that would be with me forever. My tattoo is sentimental.”

Having cystic fibrosis isn’t a random thing. It’s something that Cassie has to deal with day after day and night after night.

“The nights are usually the worst,” she said. “Most of the time I don’t sleep and I’m tired in the mornings and sleep a lot during the day. And, I have to do things perfectly to stay healthy. It’s hard to do and sometimes I break down and cry.”

But Cassie doesn’t feel sorry for herself very long. She knows that she “has it” much better than many of the friends she has made at Children’s Hospital in Birmingham.

“Cystic fibrosis affects people different ways,” she said. “It affects your lungs and your stomach. It has affected my stomach more but now that I’m older, 18, I have more issues with my lungs. But, I’m stronger than most people that have the disease.”

Cassie and the CF friends that she has met at Children’s compare notes on Facebook about medications and health issues and other things, too.

“We are curious about each other and what their lives are like,” Cassie said. “It would be good to have those friends around because we have so much in common, but we can’t be together. We are only contagious to each other. There are certain bugs that we can swap back and forth and swapping makes some of them stronger. But it would be nice to be real friends.”

Cassie attended private kindergarten and then public school before being home-schooled.

Her days were much the same as she took her morning pills and did her aerosol treatment and then put on the chest therapy vest that shakes her to help clear her lungs. The same procedure was repeated in late afternoon.

The rest of the day was hers to sleep, play the guitar and drums and bond with the computer.

“I’m in the hospital a lot of the time so I don’t have time to make a lot of friends,” Cassie said. “But my best friend has always been my sister, Christan. She understands me the best. She’s a good person and, if I didn’t have her, I don’t know if I could go through each day.”

There is an 11-month age difference between the sisters, and Christan is the older. The sisters are attending Wallace College in Dothan together.

Christan is studying speech pathology and Cassie’s interest is cosmetology.

“I wanted to be a nurse but I knew that I would have to be in the hospital every six to eight week and I would miss a lot of classes and not be able to catch up,” Cassie said. “But I had always been interested in cosmetology so that’s what I’m studying and I really like it.”

Cassie attends class on Tuesdays and Thursdays, and now, she working the other days.

She now has a job at Brooke’s Beauty Salon in Troy.

“I’m excited about working,” she said. “I do shampoos, make appointments and clean up and it’s a good way for me to learn more about cosmetology. I don’t work much so I don’t make a lot but a little is enough for me. I want to make enough to buy a laptop to use when I’m in the hospital.”

The hospital is a second home to Cassie and she is close to several of the nurses and staff members so, along with her CF friends, she has an extended family at Children’s Hospital.

Her mom, dad, brother and other family members are caring, loving and supportive. They keep her spirits high bringing joy to her life.

And, the closeness she and her sister share is extra special. They have formed a mutual admiration society.

Cassie calls her disease “sixty-five roses” her sister shows her how beautiful life is, even those a terrible disease has invaded her body.

“Christan takes me with her and we hang out with friends and have such a good time,” Cassie said. “And, we have fun just being together. I don’t know what I would do without her.”

And, the feeling is mutual.

“We are really best friends,” Christan said. “Even when we were little, we were best friends but I didn’t understand about CF. But, when Cassie was in the hospital, I would go and stay with her and try to make it as much fun as possible.”

Now that Christan is older, she understands that “sixty-five roses” is a terrible disease and she takes her sister under her wing.

“Cassie is the toughest person I know,” she said. “I don’t know how she could go through so much. When I don’t feel good or things aren’t going my way, I think about Cassie and see her smile and that changes things for me. She has to go through so much and still she is happy. She is my inspiration.”

Christan is excited about Cassie’s work opportunity because it is bringing her so much happiness.