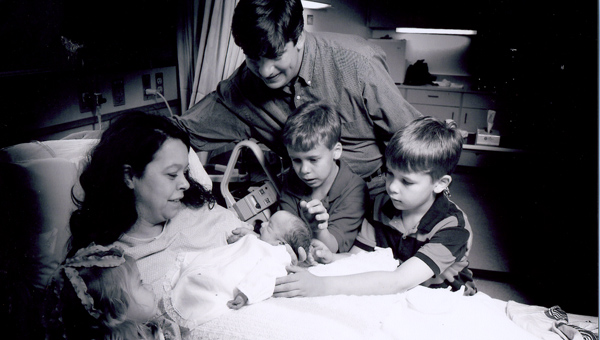 Jennifer Hill, her husband Jamie, and their children Jay, Cooper and Lucie Rose posed with baby Eli in this family portrait. The birth and death of Eli was a bittersweet moment in the familyÕs life that Hill will commemorate with a balloon release at 6 p.m. today in honor of Pregnancy and Infant Loss Remembrance Day. The event takes place behind GodÕs Way Baptist Church and is open to the public. (Submitted Photo)

Jennifer Hill’s two sons, Jay and Cooper, are hauling a tree branch in their backyard.

Hill’s daughter, 3-year-old Lucie Rose, is sick with a cold. She has long blond hair and a ring of chocolate around her mouth. She wanders into the living room with a tiny frying pan and waves it over her head.

“I see it,” Hill tells her daughter. “Why don’t you make me something?”

She disappears into her room, only to reappear a minute later.

“I already ate it,” Lucie Rose says as she crawls into her mother’s lap.

Hill has four children—three she can see, and Eli, the baby she writes about, talks about, cries about and knows completely, even though she barely got to hold him. Eli died just two hours after his birth on February 21.

At 6 p.m. today behind God’s Way Baptist Church, Hill will lead a balloon release for about 15 families who have also lost their babies – yellow balloons for miscarriages, pink balloons for girls and blue balloons for boys. Oct. 15 is nationally recognized as Pregnancy and Infant Loss Remembrance Day. The event is open to the public, particularly to families who have lost a baby.

“I want everybody to see the wonder we felt when we had them,” she says. “It’s going to be a celebration, too.”

Eli had Potter’s syndrome, a rare disease that affects the kidneys and lungs and almost always leads to death. Hill discovered her baby’s illness about 20 weeks into her pregnancy.

The doctor had already made plans to abort, but for Hill and her husband, Jaime, terminating their pregnancy wasn’t an option.

Instead, they embraced it. Her children cuddled her belly, talked to it, laughed and cried with it. Jaime Hill found Eli’s “sweet spot,” a ticklish place on his bottom. Whenever he rubbed the spot, Eli would wriggle with excitement within the womb.

At work, Hill could feel people looking at her – the woman carrying a baby she wouldn’t be able to hold, to raise, to watch grow up. She got tired of answering questions and telling people she was fine when she really wasn’t.

So, she created a blog, at www.elisvalley-perfectlove.blogspot.com, where she poured out the pain and joy of her pregnancy.

“Carrying a baby that I knew would not live after birth was so hard, but it was such a blessing,” she says.

Through her blog, Hill met an entire community of women who had lost their children. All of them knew the grief Hill was trying to cope with every day. She formed the strongest bonds with women who were losing their babies at the same time she was, because they were in the same stages of grief.

“I guess when you go through that, you want to reach out to someone,” she says. “You don’t feel normal. You kind of feel like you’re losing your mind.”

Hill has connected with women across the country through her blog. One mother sent Hill a Christmas ornament with Eli’s name on it, for the first Christmas that the Hills will celebrate since Eli’s death.

It has been eight months, and Hill says things aren’t “back to normal,” and probably never will be. Instead, she feels like she’s shifting into a “new normal,” one in which she doesn’t blog quite as often, home-schools her children, goes to church and thinks about her baby boy.

Despite the pain, she wouldn’t change a thing.

“I’ll tell you right now, I would do it a hundred times over to hold him one more time,” she says. “But I know I’ll get to hold him again.”

Mitchell: Redistricting could be problem for rural areas