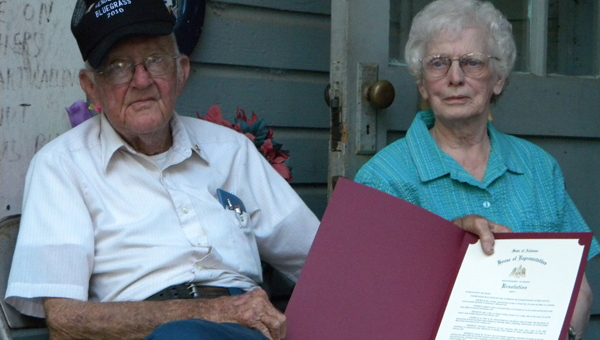 Rex Locklar and his wife, Faye, pose with the resolution passed by the House of Representatives of the State of Alabama declaring him the official Father of Bluegrass in Pike County. (Submitted Photo)

Bluegrass lovers have known for years that Rex Locklar is the Father of Bluegrass in Pike County. The state has now made it official.

On Saturday, Rex Locklar was recognized by a State of Alabama House of Representatives resolution as the Father of Bluegrass Music in Pike County.

The resolution, drafted by Rep. Alan Boothe, was presented to Locklar by Pike County Sheriff Russell Thomas during Rex’s 2010 Fall Bluegrass Festival. It came as a complete surprise to “ol’ Rex.”

“I was sitting out there on my scooter, and I saw my brother, Wiley, and all of his daughters and grandchildren coming and I thought it was real that nice they were coming to my bluegrass festival,” Locklar said. “One of the granddaughters said they wanted me to come over there on the porch and get my picture with Faye and, of course, I had to do that.”

Locklar said the next thing he saw was the sheriff coming toward him with a big envelope.

“I asked him if he was coming to serve papers on me and he said he was,” Locklar said, laughing. “I didn’t know what was up.”

When the resolution was presented to Locklar, it “got to me.”

“It was a wonderful thing to happen to me,” Locklar said. “I’m real honored. I’ve got a copy of it up at the store and I’m going to put it on the wall. That’s where folks can see it and I’ll know where it is.”

Boothe said that the resolution was offered in the highest tribute and deepest appreciation to Locklar.

“Rex is deserving of gratitude and commendation for his many contributions to the community and to the wider world of music for more than a half century,” Boothe said.

Locklar’s love of bluegrass music began at home where he developed an ear for music and learned to play different instruments.

When he was a young man, he answered Uncle Sam’s call and then returned home to join his father on the farm and in the mercantile business. He liked to play with bands at functions around the county and, around 1960, he and his friends started to pick and grin at the old Henderson schoolhouse on Saturday nights.

“That old schoolhouse became one of the premier bluegrass ‘convention centers’ in the country and has been a gathering place for thousands upon thousands of bluegrass and traditional music lovers from Minnesota to Florida and from Virginia to Texas,” Boothe said. “And at the center of it all is Rex Locklar.”

Boothe said Locklar has been the promoter and “instigator” of bluegrass music and it has thrived because of the man who is affectionately referred to as “ol’ Rex” by his extended family … and himself.

“Rex is the reason that the Henderson Bluegrass Festival is what it is,” Boothe said. “Rex is a great guy and you can’t help but like him. Rex and I go back a long way. He’s just the kind of guy you can’t forget.”

Boothe has a couple of Henderson Bluegrass Festival tickets framed in his office and he has a story to tell about them.

“Back when I was involved in the auction in Henderson, Rex asked me to mention his bluegrass festival,” Boothe said. “I told him that auctions were a business and I couldn’t do that without being paid. Well, Rex stomped off and came back with two tickets stapled together and a note that said, ‘For Alan Boothe and all of his friends.’ That’s why, everybody loves Rex.”

Everybody who has ever been to the Henderson Bluegrass Festival has an “ol’ Rex” story to tell and those who don’t need to get one because “Rex is a Pike County treasure and now the Father of Bluegrass in Pike County.”