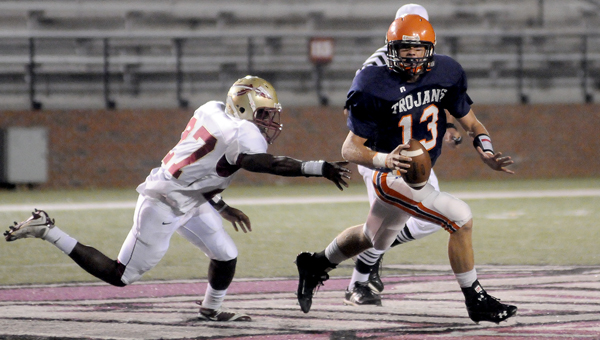 After a year removed from playing for a championship, the Charles Henderson Trojans find themselves on the doorstep of returning to the playoffs.

The Trojans can enter that door with a win Friday night against a familiar opponent.

After gutting out a win on the road last week at Rehobeth, the Trojans will return home to play host to Carroll.

In that victory over the Rebels, CHHS put up 510 yards of total offense, as Corey Dennis and Quintus Moss combined for 327 yards on the ground, however, it was almost for not, as Rehobeth scored 29-unanswered points in the third quarter to erase a 28-7 Trojan halftime lead.

After a third quarter that saw a total of 37 points scored, CHHS would go on a run of its own, scoring 22-unanswered points and cruise to the victory in the process.

The win was the Trojans’ second in a row and improved its overall record to 4-3, and its 5A Region 2 record to 3-2.

As far as the region standings go, CHHS is currently in fourth place, behind Eufaula, who is undefeated, Valley and Tallassee, each of whom has one loss.

With just two games left in region play (Carroll and Eufaula on Oct. 22) a win in either game would give the Trojans a playoff birth.

“And it’s not going to be easy, but that’s what we have to do and our kids know that and are focused on doing that.

“Carroll is a dangerous team. They are going to want a win just as badly as we do – they want their first win of the season to be against us, but we cannot allow that to happen.”

Winning is one thing CHHS has been able to do in recent meeting against Carroll.

In those six meetings, CHHS has outscored Carroll 222-95, thanks in part to the past two meetings, when the Trojan offense has put up 62 and 50 points, while the defense held the Eagles to 13 and eight points, respectively.

But previous meetings are not something Fountain said he is interested in.

“We have played well against Carroll recently, things went our way in those games, but those games took place in different seasons. We have to make things go our way again this season.

“I think this team has done a good job so far of taking care of things it can control. But this is going to be a tough game for us,” the coach said.

The Eagles will enter the game with a 0-7 record, but one aspect that will make the game interesting is the Homecoming of sorts for former Trojan assistant coach, and current Carroll head coach, Chad Lapp.

Lapp, who graduated from Carroll, returned to coach his alma mater this season after spending the past two seasons with the Trojans.

“We are all proud of coach Lapp,” Fountain said. “He got an opportunity that he wanted and I think he will be able to change the mentality down there.”

For Lapp, Friday’s game represents the beginning of a new rivalry.

“I may have coached (at CHHS) but Carroll is a school that I grew up with and went to – it’s where my heart is,” Lapp said.

Even though Lapp spent multiple seasons with the Trojans, he said he is unsure about what he will see from his former players.

“It’s always hard to tell what all to expect and how one kid is going to play in a game,” the coach said.

“But we are going to come into the game looking to do all that we are capable of doing.

“This is a neat deal for me, I have been looking forward to this game for a long time now.”

With his team so close to one of its top goals, Fountain said the Trojans have been focused on succeeding on the task at hand this week in practice.

“It’s always the No. 1 goal of any football team to make the playoffs,” he said.

“But the biggest mistake any player or coach can make is to underestimate the upcoming opponent by thinking a game is going to be easy because of the other team’s record.

“You never know what can happen in a football game. We need to play to our best capacity just like any other game.”

In the end, the coach said the only thing he is interested in is a win – no matter how big or small it may be.

“That’s the biggest thing about this game, we need to come off the field with a victory. That past couple games have been important for us, and this game is no different. As long as we win, I don’t care if we win by twenty points, or by two.”

There is plenty of reason for Goshen fans to be celebrating, besides the the recent success on the football field.... read more