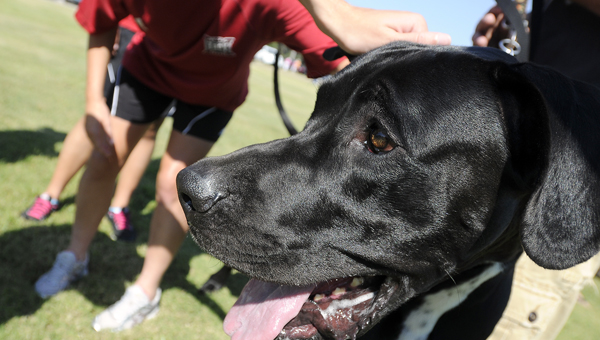 Organizers say the fourth annual FurFest was another great success for the Pike Animal Shelter Coalition.

More 300 people from throughout the community joined in the fun Saturday afternoon at the Troy Recreation Center and five of the seven dogs available for adoption found forever homes, said Kristin Strickland, chair for the 2010 Fur Fest. “There were generous donations large and small during the day along with our ticket and t-shirt sales,” she said..

FurFest is the biggest adoption event the coalition sponsors and it gives the community an opportunity to bring out their own pets for a good cause.

“This is a three-fold event. It serves as a fundraiser as well as an opportunity for people around the community to bring their companion animals to an event. It also raises awareness about the Pike Animal Shelter,” Strickland said.

Music was provided by a number of different acts, including the Park Band and Josh Johnson.

Children’s activities were abundant, but the fun was focused on the animals, with free dog washes; a doggy mountain of bones, photo sessions for pet owners and their pets and event a costume contest to see which dog had the most style.

All the funds raised at this year’s Fur Fest will go towards the building of the new animal shelter. “We have an architect rendering and a plan worked out its just a matter of having enough funds to build,” said Strickland. The shelter will be located off Henderson Highway.

“Without events like this we wouldn’t have been able to come as far as we have right now. We wouldn’t be able to raise funds for the new shelter and it makes everything worth while when we are able to start construction on the new facility,” Strickland said.