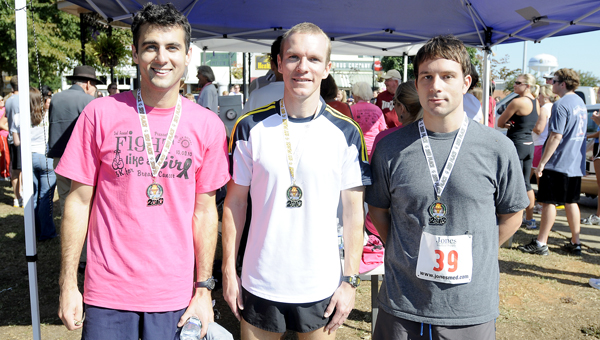 It was a K.O. for the Rotary Club’s “Fight Like a Girl” 5K run Saturday, with runners raising $5,500 for the American Cancer Society and Hope Lodge in Birmingham.

“We were very excited,” Rotarian and event organizer Jason Jones said. “My goal was $4,000, and we overshot that, so we were really pleased.”

Runners ranged in age from preteen to 60-plus. A total of 180 registered.

The award for best time went to Dr. Michael Green, an assistant professor at Troy University, who ran the race in 16 minutes and 30 seconds. He also broke last year’s record, Jones said.

“Not many people are going to beat that in any 5K,” he said.

For Green, who has trained and competed in footraces around the world, it wasn’t a personal best. “For me, it’s actually quite slow,” Green said. “But I’m happy with it.”

Then again, Green had a lot on his mind the day of the race. He had been laid up for most of the summer with a stress fracture in his foot. Instead of training, he was only able to run lightly for two weeks before the 5K.

On top of that, the international marathoner and professor had just been awarded a new title: Daddy.

His daughter Emlyn was born just four weeks earlier, and the 5K was Green’s first race as a father. Unfortunately, his wife Su and his new baby couldn’t even watch him run. Su was volunteering at Furfest, Troy’s fundraiser for Pike Animal Shelter Coalition, and couldn’t make it to the race in time.

But despite his injuries and concerns, Green was not going to miss the race.

Right after he took the top prize, Green went home and snapped photos of Emlyn wearing his medals. He said he can’t wait until she’s old enough to watch him run — and maybe toddle over a finish line herself.

“I was definitely thinking about her the whole time,” Green said.

This is the second year that the Rotary Club has hosted a 5K. Last year the club raised $3,500, and members hope to continue raising awareness and support.

“It will be a tradition, and I look forward to having it again next year,” Jason Jones said.

The club chose “Fight like a Girl” for their theme to recognize the struggle of women, and their families, who have faced breast cancer. Thirty volunteers and 35 local sponsors donated their time, money and supplies to the race.

October is Breast Cancer Awareness Month, and all of the proceeds from the race from will go to various breast cancer programs. Kay Franklin is Troy’s community representative for the American Cancer Society.

“So many people here in Pike County have been affected by cancer in one way or another, and October serves as a reminder of those who have battled breast cancer,” she said.

“There have been so many strides made in the fight against breast cancer, and we are thankful to the people of Pike County who make the progress possible.”