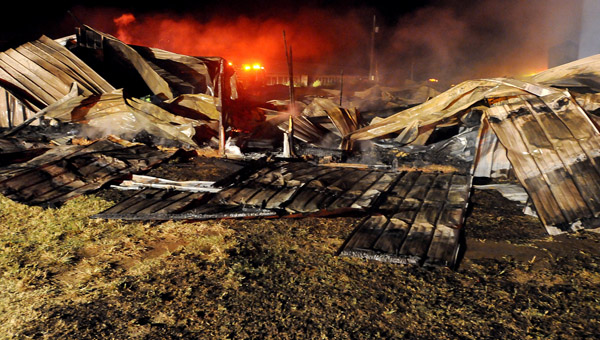 The remains of a wall of a chicken house are seen at the scene of a fire on Saturday, Oct. 9, 2010 in the Vidette community near Luverne, Ala. (Messenger Staff Photo/Thomas Graning)

”Just one of them things, I reckon,” Dana Free said as she stood watching firefighters clean up from the large fire the destroyed one of her two chicken houses late Saturday night.

Free, who lives in rural Crenshaw County in the Vidette community, had been fishing when she received the call. “They just called me and said it was gone. I don’t know.” 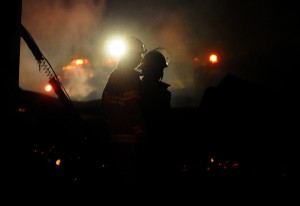 Firefighters are silhouetted while looking for hot spots at the scene of a chicken house fire on Saturday, Oct. 9, 2010 in the Vidette community near Luverne, Ala. (Messenger Staff Photo/Thomas Graning)

Five fire departments from Crenshaw and Pike counties responded to the fire in Crenshaw County near Luverne.

According the Luverne Fire Department Assistant Chief William Neal, the original call of the fire was placed at 8:59 p.m., with the first units arriving at 9:07 p.m.

“The decision was made immediately that the chicken house was fully involved,” Neal said.

Firefighters from Rutledge, Glenwood, NEC, and Goshen fire departments responded to the scene.

Firefighters were able to contain the fire to just one chicken house. According to Free, about 4,500 laying hens and 500 roosters were in the house at the time of the fire.