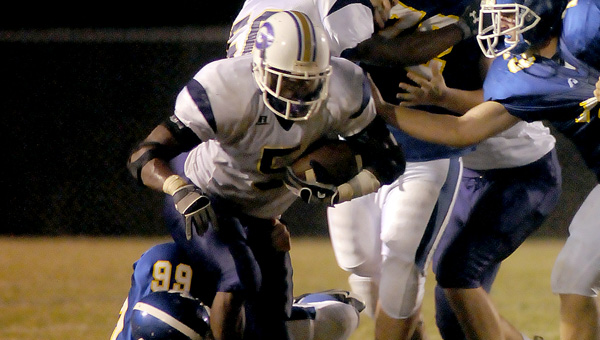 It didn’t take long for the Goshen Eagles to put points on the Alva Hawke Stadium’s scoreboard.

Just four minutes into the game, Marcus Jackson punched in a six-yard run after and set the pace for rest of the game.

But it wasn’t on the ground where Jackson left his mark in the Eagles’ 35-14 win over the Samson Tigers, it was in the air. He saved the dirt for teammate Reggie Foster who broke 100 yards rushing in the first half.

“We worked hard and did what we were supposed to do,” said Eagle head coach Bart Snyder. “Both teams played hard and showed a lot of class tonight.”

Jackson hooked up with sophomore quarterback Russ Thomas for 94 yards passing in the first half, and posting the lone score in the second quarter on a 28-yard screen pass. An offside penalty against Samson set up a two-point conversion with Deon Merritt carrying the ball.

A missed holding call against Samson and a pass interference call against the Eagles turned the momentum slightly toward the Tigers midway through the second quarter but the Eagle defense turned up the heat after turning the ball over on downs, setting up the Tigers’ first and only serious drive of the half.

The Eagles took possession on downs on their 10-yard line with about half a minute left to play.

The Tigers came out of the locker room after the half looking for payback and they found the Eagle end zone just four minutes into quarter, drawing blood on 40-yard pass and holding the Eagle offense to mid field and a punt.

Their drive stalled after Goshen defensive lineman Rashon Byrd forced a fumble with under a minute to go in quarter. Foster punched a carry to the Tiger 28-yard line and on the next play, Foster busted through the middle line for touchdown. A busted 2-point conversion set the score 28-7.

The PAT was good, but Tiger defender Cole Dean was injured and had to be removed from the field by ambulance. Late reports indicated he suffered a concussion.

The Tigers would rally after about a 10-minute delay to put 7 more points on the boards.

“We have got a lot of work to do to get ready for Highland Home next week,” Snyder said. “We did a lot of things right tonight, but we still have work to do.”

Goshen improves its record to 6-1 overall and 4-1 in the region. It faces the Flying Squadron next Friday on the road.