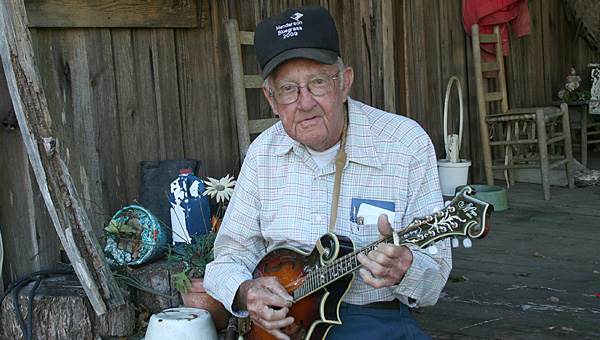 Rex Locklar jokes that he can't keep the fans away from his annual bluegrass festival at Henderson. The event draws hundreds of musicians and fans each fall to the sleepy town of Henderson. (Photo/Jaine Treadwell)

Rex Locklar says, with tongue in cheek, that he quit having bluegrass festivals at the Henderson Music Park in April. “But they won’t quit coming,” he said. “You can’t beat ’em away with a stick. They start coming in on Monday and the festival’s not ‘til the weekend. But they’ve just got bluegrass in their blood, like me.” The “they” that Locklar was talking about are the many bluegrass pickers, singers and fans that make their way each April and October to Rex’s Bluegrass Festival in the usually sleepy community of Henderson.

“This is where the bluegrass grows,” Locklar said, with a smile. And, it’s been growing like weeds for 45 years now.

When Locklar first hosted a bluegrass festival in Henderson, he had no idea that it would take hold and put down roots so deep that they couldn’t be pulled up “even if anybody was inclined to try.”

Joe Berry from Dothan has been pickin’ at Locklar’s festival for “nigh about 30 years.”

“Once you start coming to Rex’s you don’t stop,” Berry said with a smile. “Folks don’t leave, they just die.”

Berry said the attraction of Locklar’s Bluegrass Festival is simply people and playing.

J.O. Stone of Blountstown, Fla., agreed but to a point. “We’re really closer than family,” he said, with a grin. “Families fights. We don’t.”

Billy Barnes of Andalusia joined the shade tree pickers with his dobro that the others said can “talk to you.”

“A dobro is like a steel guitar and, if I’d known it was so hard to play, I might not have picked it up,” he said.

When bluegrass pickers get together the talk is usually centered on music. On Wednesday, the pickers had claw hammer style picking on their minds.

“It’s hard to do and I just can’t get my fingers to move like that,” said Freddie Peters of Ozark. “I guess Grandpa Jones is about the best at claw hammer picker that there is.”

“Oh, but Gary Waldrep from up on Sand Mountain won the championship over Grandpa Jones,” Stone said. “He was that good.”

There was a moment of silence as the men were giving thought to their favorite old-time pickers. Then, as if birds taking to flight, they began together to play that high lonesome sound that is the trademark of bluegrass and a crowd began to gather.

“Wow, now that’s nice,” Locklar said giving the guitar the “once over.”

“I’d like to be able to play that thing but arthritis has got the best of me,” he said. “My old fingers won’t work like they used to.”

The Benton brothers are among the younger musicians that make their way to Henderson when the Henderson Music Park is the place to be. In fact, they chose Rex’s Bluegrass Festival over the Tennessee Homecoming Festival that features more than 100 bluegrass acts.

“We wouldn’t miss coming over here,” Alex said. “It’s good to be around the people that come and learn from them.”

Lee said that it’s a privilege to be a part of Rex’s Bluegrass Festival.

These days, Locklar gets pleasure from seeing pickers of all ages come and play his kind of music and knowing that the roots of bluegrass run deep and that there’s no danger in it dying out.

“Not as long as there are young people playing it,” he said. “There are a lot of us old codgers still around, and we’re all glad to see these young folks playing bluegrass. When we’re all dead and gone, there will still be bluegrass. These kids will keep it going.”

The Henderson Bluegrass Festival traditionally attracts people from nine states. On Wednesday, there were already 38 RVs on the grounds and the 80 campsites were expected to be filled by Friday.

Picking will begin at the crack of dawn today and will go on long after midnight. Admission is only $5 “if you have it.” And, if you don’t, see Rex and he’ll let you work it out.

“Don’t want nobody to miss out on bluegrass,” he said, with a smile.