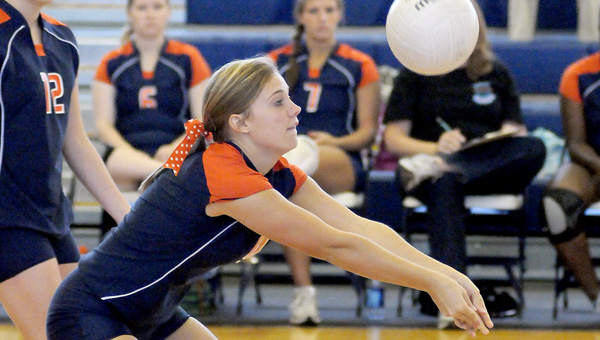 While the 2010 regular season may have been a difficult one for the girls of the Charles Henderson volleyball, the team had something to smile about coming off the court Thursday night.

“This is a pretty good feeling right now,” head coach Jennifer Sikes said after the match.

“It’s always good to end the regular season on a positive note, but I hope this isn’t the last time something positive happens this season.”

The coach was referring to the upcoming area tournament, which will be held at Eufaula with matches starting on Monday morning.

“I thought we had a really good practice (on Wednesday), we did everything right,” the coach said.

“But I told the girls that what really disappointed me was how we had a great practice on Sunday and came out flat the following day against Goshen.

“The girls did everything right (Thursday) and it showed on the court,” Sikes added.

After dropping the third game to the Purple Cats, the Trojans bounced back Becca Hartley led the Way for her team as she started the fourth game off with five consecutive points, including an ace, to put her team in position to win the deciding match.

Hartley finished with eight points in the game.

“The girls did a great job of responding (to the third game loss) with a great fourth game,” Sikes said.

“And that showed a lot to me, but more importantly, I think it proved a lot to the girls themselves.

“They fought back hard and got some positive results because of it,” she added.

“I thought our seniors stepped it up (Thursday),” Sikes said.

“And I was proud of how they played all game long. They helped keep the rest of the girls focused on winning.”

CHHS will be in action Monday morning at 10 a.m. in the area tournament at Eufaula.

The USTA returns to Troy

The USTA Tennis Classic of Troy is set to get under way this weekend with qualifying matches beginning on Sunday... read more