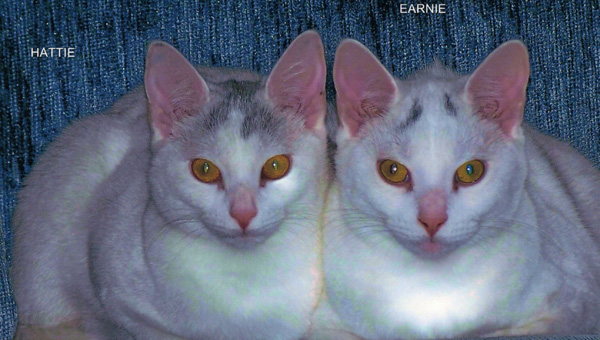 Twin cats Hattie and Ernie Murphree won the Humane Society of Pike County pet photo contest and will grace the cover of the calender. (Submitted Photo)

Until the very last minute, Vanessa “Cat” Howard was in the lead but, when the mail-in votes were counted, Hattie and Ernie had 1,510 votes to Vanessa’s 1,051 votes.

“It was a close vote but Hattie and Ernie will be on the cover photo of our 2011 Pet Photo Calendar,” said Lisa Howard, contest chair. “We congratulate Eloise Murphree and Hattie and Ernie. They were great competitors.”

Murphree said she is thrilled that her twins will be featured on the Humane Society of Pike County’s 2011 calendar.

“It’s an honor,” she said. “Hattie and Ernie are very special to me.”

Murphree adopted the kittens about a year and a half ago on the insistence of her friend, Carolyn Brantley.

“The cat that I’d had for so long got sick and died,” she said. “I said that I would not have another cat because, at my age, I would die before it did if it lived as long as it was supposed to. And, too, my cat was a house cat and it just wouldn’t be fair to keep a cat shut up as much as I work.”

Brantley suggested that Murphree get two cats but she wasn’t interested. One day Brantley called and said she had reserved a cat for her and she could have the pick of the litter.

“I had always had female cats so I wanted a male, and I wanted a kitten the color of one I had never had before,” Murphree said. “That left only white.”

To her surprise, in the litter, were two white kittens, a male and female.

“Two white cats and a male. That broke down any argument that I could have,” Murphree said, laughing. “I guess that God wanted me to have the two white kittens.”

The five-week-old twins were “live wires” and almost tore up house and home.

“I had to put everything in drawers and keep them closed and take all the drapes down,” Murphree said, laughing.

“They put a lot of gray hairs on my head but they have settled down now – some.”

Now that Hattie and Ernie are celebrities of sorts they will have to be on their best behavior and they are working on that to make all of those who voted for them proud.

“Hattie and Ernie might have gotten the most votes so far in the Pet Photo Contest,” Howard said.

“I’ll have to check on that. But we were excited about the vote total, which was a little more than 8,500. Each vote was a dollar and those dollars, along with the entry fees, will go a long way in funding our spay and neuter program in the spring.

The Humane Society of Pike County wants to thank everyone who participated and all of those who voted for their favorite pets.”

The other entries in the contest will be the pets of the weeks.

“I’m just glad that the winner was chosen by vote,” Howard said. “All of the pictures were so adorable. It would have been a hard decision to make.”

The 2011 Pet Photo Calendars will be available for purchase the second week of November.