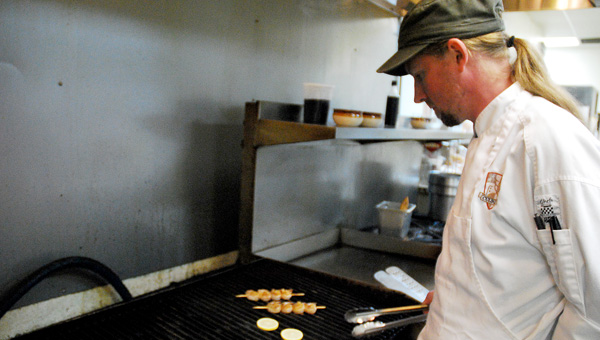 Pulling on the inspiration of seasonal ingredients, Joseph Pullen likes to use the freshest available ingredients for his weekly specials at the club. Dishes such as the herb grilled shrimp, as well as pepper-crusted steaks and salads with homemade dressings, have delighted diners since his return to his hometown of Troy. (Photo/Lindsey Robinson)

After studying French cuisine in Birmingham and making delicate pastries from scratch, chef Joseph Pullen has returned to the town where he ate his first greens and learned how to grill a good steak.

Pullen, 28, is the newest chef at the Troy Country Club. Since his arrival in June, he’s brought a more refined palate to the club and introduced several hit dishes to its patrons.

In a baseball cap, his ponytail hanging between his shoulder blades, Pullen directs his “staff” of two or three in making savory entrees and mouth-watering desserts for about 40 people each night, Wednesday through Saturday.

Pullen grew up in Troy and went to Troy University, where both of his parents are professors. In college, Pullen worked at Mossy Grove Restaurant where he learned the basics of a cook’s life. Among other things, he studied menu design and food photography.

After school, Pullen entered an intensive nine-month program at Culinard in Birmingham. Most of his training was in savory dishes with French inspiration.

“That’s more or less where the modern culinary movement started,” he said.

Other than a brief stint at Wal-Mart, Pullen has worked exclusively in the food business, from Papa John’s to Mossy Grove to Euro Bistro, a European style restaurant with an Italian flair in Enterprise. It was at Euro Bistro that Pullen — chef’s training in tow — began to experiment with new flavors and cooking styles.

“We were given a lot of freedom to do what we want, come up with specials,” he said.

Eventually he followed his roots back to Troy, where he accepted the job at the country club and began shaking up the menu.

He now serves different entrees every week and tempts patrons with pepper-crusted steaks, crème brulee and salads with homemade dressing. In fact, when Pullen has his way, nearly everything he cooks is homemade from fresh ingredients

“If possible, I like to make everything from scratch,” he said. “I don’t like to use bottles or cans.”

At home, he’d rather throw together a giant pot of chili or pasta than fuss over detailed dishes. In a house he shares with his brother, Pullen and his family grow their own vegetables in his backyard.

Clubhouse manager Heath DeRamus, said Pullen has introduced locals to new dishes and added a dash of personality to the club’s kitchen.

“I think all the members have been extremely pleased with everything he’s prepared,” he said. “I’m glad to have him here.”

A Troy firefighter sprays water on the smoldering remains of a brush fire on Hillside Ave. on Wednesday. (Photo/Wendy Ward)... read more