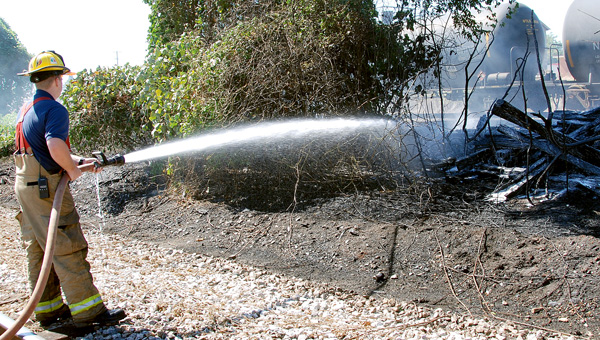 A Troy firefighter sprays water on the smoldering remains of a brush fire on Hillside Ave. on Wednesday. (Photo/Wendy Ward)

On Wednesday, a pile of crossties caught fire by the railroad tracks on Hillside Avenue. No one was injured, and the fire was quickly contained by 10 fire personnel on two trucks. They responded to the 911 call at 12:48 p.m.

“Everything is under control,” Fire Captain Willie Parker said as firefighters soaked the smoking planks and scorched foliage.

Alfonzo Rouse, 57, saw the flames and smoke on the ties and in the dried trees and kudzu as he was chatting with the mail carrier outside his home. His house is approximately 150 feet from where the fire started.

“I was more worried about those boxcars,” he said, pointing to the train of black tanks that had to brake for the fire.

Nearby, one tank held potentially hazardous ethanol fumes, Engine 5 Sergeant Curtis Shaver said. But due to the fast response of the fire department, the tank posed no problems.