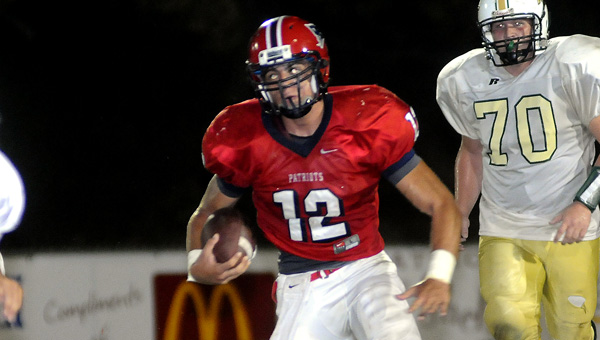 While the Pike Liberal Arts Patriots may have passed their most recent test, another is in store for the defending champs on Friday night.

This time, with playoff implications on the line.

Even though the Patriots became the first team this season to hand Prattville Christian a loss last Friday night, it was a none region game, so while the team’s overall record improved to 5-1, its region record remained the same, at 2-1.

And PLAS finds themselves in need of some region wins.

It’s currently a four-team race for the AISA AAA Region 1 regular season crown, as Monroe Academy, Fort Dale, Glenwood and PLAS are all in the running.

However, the Patriots are trailing as Monroe Academy is currently the leader, thanks to its 3-0 record in region play.

Fort Dale has a 4-1 record, with it loss to Monroe last week, and Glenwood, as of today, stands with a 3-1 region record.

By Saturday, the playoff picture will be a bit clearer, as the Patriots and the Eagles will try to secure better playoff positioning with their game on Friday night.

“This is the biggest game of the season for us, so far,” head coach Steven Kilcrease said during practice Tuesday afternoon.

“(Prattville Christian) was a quality win, but (Friday’s game) counts as far as the playoffs go. “We have to have this win if we want a chance to host a playoff game. At this point we control our own destiny. Monroe (Academy) is really in the driver’s seat as far as first place in the region goes, and if we want to be second in the region, we have to win Friday night.”

This will be the third meeting in as many seasons between the two teams, as each has a victory as the visiting team.

In 2008, PLAS took down Fort Dale 22-16 and in the following season, the Eagles came to Troy and handed the Patriots its only loss of the season, winning 28-20.

As for what the Eagles will bring to the table in terms of style of play, Kilcrease said there are not many teams that are as physical as Fort Dale.

“They are very aggressive on defense,” the coach said. “I expect them to blitz a lot.

“There are a lot of blitz packages that they run that are really tough to stop, and what makes it more difficult is their ability to find and create holes at the line.

“But we worked against the 3-3 (one of Fort Dale’s defenses) all during preseason, so we should have the ability to pick it up and do something against it,” Kilcrease added.

Offensively, the Eagles will bring an equally aggressive attack against the Patriots.

And like it did in the week leading up to Prattville Christian, PLAS will be focusing on shutting down a dual-threat quarterback in Fort Dale’s Hunter Armstrong.

“They have a very good offense, and it’s led by Hunter Armstrong,” Kilcrease said.

“He has a great arm but has been beating a lot of people with his legs this season to. It’s not like (PCA’s J.J. Hudson) where you can put nine, ten guys in the box. If you do that, Armstrong will beat you with his arm. So, we have to be balanced on defense if we want to stop them.”

Last season, the 6-foot-3, 185-pound Armstrong threw for an average of 162 yards and touchdown and also added 300 yards on the ground during his junior season.

But while Kilcrease and his coaching staff have been focused on getting the team prepared for Fort Dale, they have been dealing with a few missteps internally.

“We have wasted that last two days of practice,” Kilcrease said. “We are not getting the kind of response (on the practice field) from the guys that we are used to and with as big of a game as we have this week, that is something that really concerns me.

“I will say that we have had great leadership from our seniors all year long, and the rest of the team has followed right with them,” the coach added. “If we want to win on Friday, that is a must have.”

The Patriots will look to improve its region record with a win over Fort Dale Friday night at home.