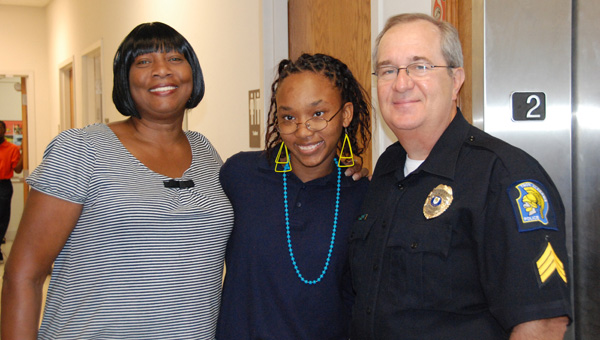 At the Troy Police Department Tuesday, 10 bouncy teens piled out of a Troy City School bus. After a few minutes of giggling, pushing and energetic chatter, their teacher Laura Renfroe arranged her students for a group picture and introduced them to Sgt. Benny Scarbrough.

But Renfroe’s class wasn’t at the station to learn about Troy’s judicial system or the hardships of a life of crime. Instead, they’re learning how to dial 911 and remember their home addresses.

Renfroe teaches the Self-Contained Special Education Class at Charles Henderson High School. Through a grant from The Troy City Schools Education Foundation, she will take her students on 16 outings to familiarize them with the city and learn fundamental life skills to help them transition into adulthood.

The project, called the Community Integration Program, will include field trips for buying groceries on a budget, visiting the hospital and doctor’s office, picking up medicine at a pharmacy and checking out books at the library.

The Community Integration Program is one of eight programs that the Troy City Schools Education Foundation has supported this year, with more than $14,000 awarded in total. The foundation is a non-profit organization that provides money for special school programs that aren’t included in classroom budgets and wouldn’t be available to students otherwise.

Foundation President Dianna Lee said the grants enhance the traditional classroom experience by giving students specialized learning opportunities and a greater appreciation of the world around them.

“The grants are fun, but in each one of them there is learning,” Lee said. “That’s the exciting part.”

After their trip to the police station, Renfroe took her students to The Pines restaurant, where they ordered off a lunch menu—using the $10 provided by their grant—and practiced table manners.

Mundane tasks? Maybe, but after weeks of practice and study in the classroom, ordering each meal was a small victory.

“We’ve been working on community integration skills since the beginning of the year,” Renfroe said. “They did really good. We had fun.”

Hands-on learning and life lessons are what the grants are created for, according to Lee. Since it’s establishment in 1992, the foundation has raised about $125,000 for grants.

“They enhance what the children are learning in the classroom,” she said.

Other programs sponsored by the foundation this year include “Through the Lens—the Art and Science of the Montgomery Zoo,” “A Click Into the Future,” “Trip to the USS Alabama Battleship/Exploreum,” “Road Scholars, a Trip to the Huntsville Space and Rocket Center” “Salvador Dali – The Art & Culture of Spain,” “The Arts in Alabama,” and “Books for Hope,” an essay program for high school students.

Karla Johnson, along with her ninth-grade class, began the Books for Hope project four years ago as an opportunity for her students to enrich the lives of students in one of the most war-torn areas in the world.

In Books for Hope, Johnson’s class will write creative essays that will be compiled into books and sent to students in Uganda, a small country in eastern Africa with a history of civil war and child exploitation.

“The students take a fictional story and weave in non-fictional elements,” Johnson said. At the end of their project, the students will participate in a walk-a-thon that replicates the 6-12 mile route that Ugandan students walk to school every day.

More than 400 books have been sent to children in Uganda in the past four years, three of which were funded by the Troy City Schools Education Foundation.

“I’m very thankful. Not only are they helping our kids, but children half around the world as well,” Johnson said.

The foundation is poised to start its fundraising for next year. Grant funding relies on support from faculty, administrators and staff in part, but also fromlocal businesses, Lee said, and she hopes business owners will show their support for Troy schools.

“The students we educate now are the workforce of the future,” Lee said.

Rachael Ward contributed to this story.

People prepare to ride the Tornado ride at the Pike County Fair on Tuesday. (Messenger Staff Photo/Thomas Graning) For the... read more