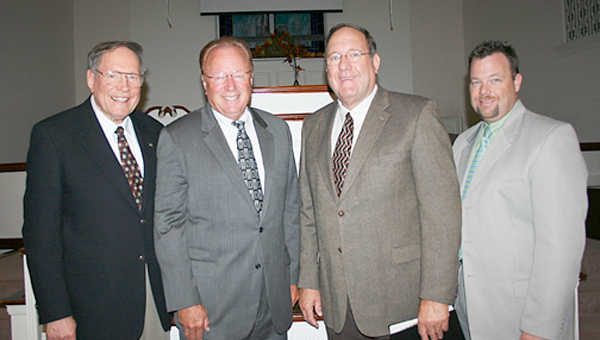 Life is not always good.

When the three Hood brothers sat down after the Sunday night revival service at Salem Baptist Church to discuss their ministries, their family relationships and their relationships with God, they were openly honest.

The brothers, Bobby, Jimmy and Jerry and Jerry’s son, Darren, were all called by God, at different times and in different ways, to do His work.

“Uniquely called,” is the way they described their callings to the ministry and also “unlikely.”

Early on, life was not good to them. In fact, life seemed to have it in for them.

They didn’t grow up in a Christian home. There was discord in the home. Their father struggled on their 10-acre farm and the boys right along with him. And, their mother was carrying a bitterness that no one really understood. But through it all, there was God.

“Our parents were believers but they didn’t attend church and it’s not likely that we would have either,” Bobby said. “We grew up in a small town in Mississippi, Ellisville, and life was hard. We worked hard and, when we didn’t do right, we got whipped hard.”

“With a plow line,” Jerry said with a nod of his head.

The bothers remembered that if their father didn’t have work for them to do, he would give them a sling blade and put them to work cutting down the bitterweeds.

Three “white haired angels” must have realized how life was for the “cottonhead boys” because they made it their mission to take them to church.

“It was a small church on the west side of town, the poor side of town,” Jimmy said. “But that little shotgun church was a heavenly place for us to be. Sometimes, we even had ice cream.”

It was there in that little country church that the Hood brothers learned about Jesus Christ and His love and saving grace.

“Had it not been for those ladies and that church, we might have been the ‘hood-lum’ brothers,” Bobby said, with a smile.

And, for the role they played in bringing three little boys from a dysfunctional home into the house of the Lord, Jimmy said he is sure that those ladies have “a hotline to heaven.”

Bobby is the oldest and was the first to leave home. He left thinking that he would never go back. God had been especially good to him. He had gifted Bobby with a terrific voice, the ability to reach young people and a desire to go into the world and tell people about Jesus. He knew college and seminary were the avenues he must take to get where God wanted him to go.

But, things weren’t good back home. Jimmy, a high school junior, “hopped off” and got married and found himself in a dire situation.

“We lived in an apartment and shared a bath with two other apartments and there were times when we didn’t have enough to eat,” he said. “I kept going to school and my wife worked and we made it – the hard way.”

All the while God was dealing with Jimmy but he wasn’t listening.

“I resisted and I resisted,” he said. “I kept saying ‘no’ to God because I didn’t think I could pass college work. But He didn’t give up on me. After 22 years in the military, when I was 41 years old, I surrendered to God’s call.”

Jerry, the baby brother, received God’s call when he was 16 years old but it wasn’t until several years later that the call was crystal clear what God wanted him to do.

“All my life, I had felt the call to evangelism,” he said. “It was several years, before I knew I was called to pastor.”

God’s call was never doubted by the brothers. They knew He had called them and turning away from that call would have been easy – almost understandable.

“We didn’t have the means to go to college and to seminary,” Jimmy said. “We didn’t have anybody to help us financially. At least we didn’t think we did, but God made a way.”

The brothers said that, when times seemed darkest, the money would appear. They never knew the source but they were always amazed at God’s love.

And, peace came to their family. After their mother’s death, the brothers became very close to their father during his battle with leukemia.

“We were with him 24 hours a day, seven days a week for 11 weeks,” Jimmy said. “There was not a time when he opened his eyes and one of us was not there. He lived and had a good life for several years.”

All three are now serving churches, Bobby at Salem in Brundidge, Jerry at Mount Enon in Dothan and Jimmy at Centerville in Ellisville. Darren is the minister of music at Southside in Southside.

They are in Pike County for a revival through Wednesday at Salem Baptist Church in Brundidge. Services begin at 7 p.m. daily.

“Growing up we were hellions, but God changed us,” Bobby said. “God in His grace didn’t allow us to be that. And, we praise God for what He did in our lives. Through it all, God was there. And God is good.”