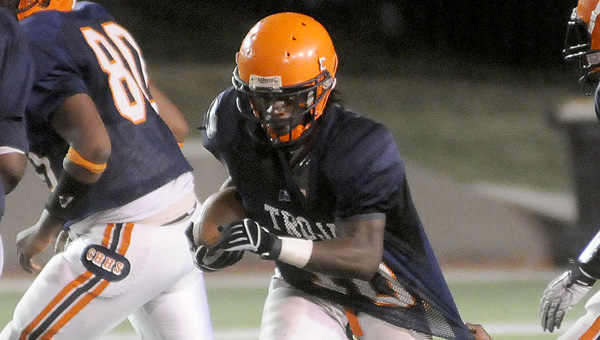 When the final horn sounded, that’s exactly what the end result was.

After dropping two-straight games, the Trojans found themselves looking to get back on track during its Homecoming game against region foe Russell County.

With a strong performance on both sides of the ball, CHHS was able to do just that, as it claimed a 33-19 win over the Warriors.

“It wasn’t the prettiest win but our guys knew the importance of this game. They knew coming in that with this win, we would really control our own destiny as far as making the playoffs.

“This was a big win because we got one step closer to reaching that goal,” the coach added.

The victory evened both the Trojans’ overall record, 3-3, and region record, 2-2.

Unlike the past two CHHS games, the offense got off to a fast start.

In its opening drive, the Trojans marched down the field, taking an early lead thanks to a one-yard run by quarterback Corey Dennis, capping a 10-play, 48 yard drive that last six minutes.

A missed extra-point left the Trojans with a 6-0 lead, and that would remain the score until the Warriors found the endzone early on in the second quarter.

On the next CHHS possession, RCHS would take the lead on an interception return for a touchdown after a Dennis passed that was tipped and bobbled by Laquavious Bryant was snatched by a Warrior defender, putting his team up 13-7.

That would be the last time RCHS would have the lead.

On the following Warrior possession, senior linebacker Louis Schrieber would get this first interception of the season, putting the Trojans in position to tie the game – which it would after another touchdown run by Dennis, this time from five yards out.

Again, the Trojan defense would rise to the occasion on the next Warrior possession, this time with Bryant grabbing his first of two interceptions.

The turnover would set another CHHS scoring-drive, this time Dennis using his arm to put points on the board.

At the half, the team in orange and blue would have a 20-13 lead, and one it would not relinquish.

“I thought our guys were a little nervous at the beginning of the game,” Fountain said. “Both teams looked like they were playing not to make mistakes, because both knew how big this game was.

“But like I told our guys, you cannot play with fear, you got to be willing to play ball no matter what.”

In the second half, the Trojans did just that.

On its first possession of the third quarter, the Trojans again would find the endzone thanks to a little trickeration.

All season long, running back Quintus Moss has used his legs to score points, however on Friday night, its was the senior’s arm that put the points on the board, after he found Bryant in the endzone for a nine-yard pass that put CHHS up 26-13, after another missed extra-point.

The Warriors would again cut the lead, this time scoring with a little over a minute remaining in the third quarter, to make the score 26-19.

Just three plays later, Dennis would find Bryant for the second time in the game, as the two connected on for 41 yards and another score to put the Trojans up for good at 33-19.

“I thought we did a great job of controlling the football in the second half,” Fountain said.

While the Trojans only out gained the Warriors 327 to 290 offensively, it was the turnovers that made all the difference according to the coach.

“Turnovers were key for us,” Fountain said.

“The defense made some really big plays tonight.”

Like he has done all season, the Dennis led the way for his teams as he finished completing 13 of his 18 passes for 173 yards and two touchdowns.

He also added another 73 yards on nine carries and two scores.

“This was a must win game for us,” the CHHS signal-caller said.

“We basically looked at this as our first playoff game. We knew we needed to play well and we did. Now, we have to keep playing that way for the rest of the season.

One of Dennis’ favorite targets of the night, besides Bryant, was sophomore Tehron Stallworth, who was playing in just his second game due to injury.

The sophomore finished with three catches for 34 yards.

This time last season, the Trojans were looking at a 1-5 record, yet now, the team is sitting at 3-3, with the playoffs in mind.

What a difference a year makes.

“I’m proud of the guys, and I told them that,” Fountain said.

“We dug ourselves in hole that was hard to get out of. This season, we were faced with the same kind of situation and we found a way to help ourselves out.”