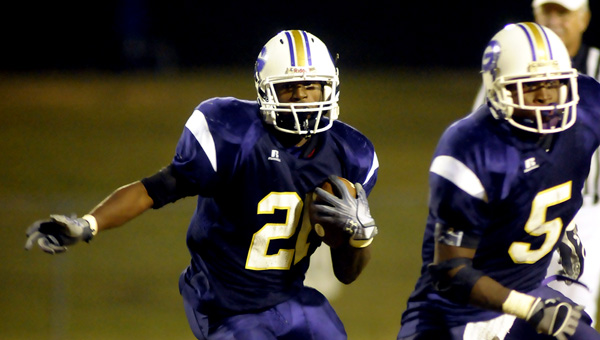 Marcus Jackson led the Eagles’ assault with 130 yards rushing and four rushing touchdowns of (11,31,23 and 20 yards).

He also caught a 22-yard touchdown pass from quarterback Russ Thomas then opened the second half with a 75-yard kickoff return.

Jackson attributed his success to the coaches and the offensive line, in particularly lineman Jeffery Long who he called his “right hand man.”

Long who also plays defensive end and linebacker, recorded a sack for a 14-yard loss. When asked what he thought about a defensive performance that saw two takeaways via interceptions, one by Brandon Alford, the other by Reginal Foster, Long thought the defense could have played more physically, however he mentioned the intensity the team has had at practice each week as they strive to become better.

Foster who plays running back alongside Jackson, also had a big night, piling on 128 yards rushing while scoring on a 79-yard touchdown run.

Tight end John Bean got in on the act as well, scoring on a four-yard touchdown run. Marcus Coleman also showed his play making abilities with a 13-yard scamper that added another six points to the board.

In all the Eagles took the Calhoun defense to task with a total of 309 yards rushing while scoring seven touchdowns on the ground.

Making a very strong case for their having the best running game in Pike County.

Although, as very good head coach knows a good running game is one of the by-products of having a good offensive line, which was a concern for the Eagles going into the season with only two returning linemen.

However, Synder, while still seeing the line as a concern, mentioned how hard the players in those positions have prepared each week, commenting on the growth of their maturity level since the summer.

However, the game was not all fun and games for the Eagles, as their starting quarterback Jerome Lawrence hurt his throwing arm in the first quarter of play and was replaced with backup Thomas for the duration of the contest.

The Eagles have won their last three games and are now 5-1 overall, 3-1 in region play as they head on the road next week to play Samson.

While the two schools met just a week ago on the gridiron, Goshen and Pike County got together again on... read more