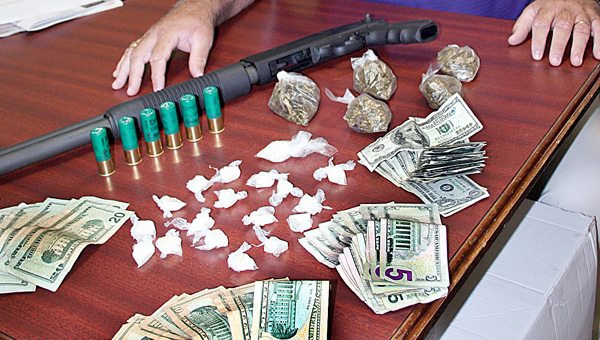 A Brundidge area man was arrested Friday morning by local law enforcement and charged with drug trafficking crack cocaine and possession of marijuana. Also in his possession were $1,000 in cash, a 12-gauge shotgun and buckshot. Pike County Sheriff Russell Thomas said the street value of the crack cocaine was about $5,000. (Photo/Jaine Treadwell)

A drug bust early Friday netted netted about 60 grams of cocaine and landed a a Brundidge man in jail on charges of drug trafficking.

The Pike County Sheriff’s Department and the Troy Police Department were assisted by the Alabama Department of Corrections Canine unit Friday in the arrest of Dontavios Moultry, 25, Highway 231 Brundidge, on charges of drug trafficking crack cocaine and the possession of marijuana.

Sheriff Russell Thomas said Lt. Bob Williamson had obtained a search warrant for Moultry and his vehicle, a 1953 Cadillac.

“We had been watching Moultry for some time and, when his movement indicated that he was trafficking, he was stopped on U.S. Highway 231 near Troy Regional Medical Center Friday morning,” Thomas said. “Inside his vehicle, we found two ounces of crack cocaine – about 60 grams in eight-balls – with a street value of about $5,000 — more or less.”

The suspect was also in possession of five bags of marijuana, $1,000 in cash, a 12-gauge shotgun and six buckshot shells.

Moultry was arrested without incident.

Calista Everage stood at the door of the Municipal Courtroom and hugged the neck of everyone who came to say... read more