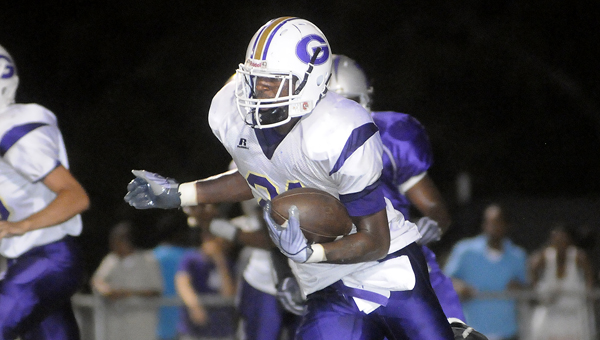 Through the first four weeks of the season, no team was able to defeat Pike County.

It was not until last week, that a team the from the same county took down the Bulldogs.

The Goshen Eagles went into one of the biggest games of the season and came out victorious, as it dispatched its county rivals with ease, cruising to a 47-24 win.

As it had throughout most of the season, the Eagles took the ground, not the sky, to win.

Along with the dynamic duo, Jerome Lawrence and Marcus Coleman finished with 60 and 29 yards, a piece in the big.

“Last year, (the PCHS game) really put us over the hump,” head coach Bart Snyder said. “We learned a lot about what kind of team we had and I think the same thing holds true for this season. We really found out what we are capable of doing.

“We had a great week of practice (last week) and we responded very well in the game.

“But like we have told the guys all season long, the current game is the most important one and even though we got a great win over a very good and well coached Pike County team, that’s all in the past,” he added.

In the Eagles’ future is region play once again and more specifically, Calhoun.

The Tigers come into the game with a 1-4 record, with its lone win taking place at the beginning of September against Zion Chapel.

Since that win, CHS has allowed 30 or more points in the following three games to Elba, Red Level and Wilcox Central.

With CHS entering today’s game with a losing record, and GHS coming off a big win, Snyder said he is a bit concerned of a ‘let down’ game.

“That is something that has crossed my mind,” the coach said. “We were very focused in on Pike County and we had a great week of practice leading up to it.

“But this week, we have had another great week of practice leading up to Friday.

“We have preached all season long that the upcoming game is the most important. They guys understand that and this week has been no different,” Snyder said.

This week is a little different from other weeks at GHS though, as the Eagles and their fans will be celebrating Homecoming.

While the week has been field with theme days, floats and other activities, Snyder said the football team has only one objective to contribute to the festivities – a win on Friday night.

“What the team contributes to the week is what goes on between the lines Friday night,” the coach said.

“The guys know this and they have done a good job of working hard to get ready to give their fans a win (today).”

As for the upcoming opponent, Snyder said he expects to see a very athletic Tiger team on the field.

And while the PCHS game may be in the past, it has prepared the Eagles for what to expect today.

“We saw a very athletic team last week with Pike County and a tremendous athlete in (Jerrelle) Bailey,” the coach said.

“(Bailey) has been unbelievable all season long but I thought (defensive coordinator Pete Harrison) and the rest of the coaches put together a great game plan for stopping him.

“We did a good job of going after the ball (last Friday) and we are going to have to have the same kind of approach in this game,” Snyder added. “If we are able to stop them early and get some points on the board quickly, we will be OK.”

As the Eagles reenter region play, they do so with a 2-1 record, which is currently good enough for a three-way tie for second place behind Elba, who is undefeated.

Above everything else, the coach said this was a game his team has to win simply because it would get them closer to where they want to be when the regular season comes to a close – the postseason.

“This is a region game,” Snyder said. “It’s important, just like all region games are.

“We already have one loss (in the region). A win (today) helps us get one step closer to our No. 1 goal which is make the playoffs.

“We got to have this game,” he added.

The Eagles will look to fly to a Homecoming and region win today at 7 p.m.