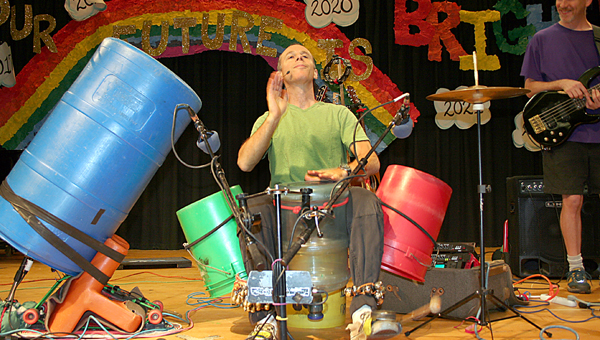 Musician Billy Jonas brought his funky style to Troy and Goshen elementary schools on Wednesday as previews of his performance tonight at the Claudia Crosby Theatre. Jonas combines traditional instruments and repurposed objects to create his unique sound. (Photo/Jaine Treadwell)

If the inner child in you has been wanting to come out, the best jumping off place is the Claudia Crosby Theater tonight and the catapult will be the Billy Jonas Band.

Billy Jonas and his band performed at Troy and Goshen Elementary schools on Wednesday and will perform at Pike County Elementary today before the public performance at 7:30 tonight at the Crosby Theater.

“The school shows are opportunities for kids to witness and participate in a no-holds-barred creative extravaganza,” Jonas said. “In addition to voices and conventional instruments, we play ‘re-percussion’ found, forged and recycled-object instruments.”

John Jinright, presenter chair for the sponsoring Troy Arts Council, said he wished the children’s orchestra could be a part of tonight’s concert.

Billy Jonas creates music from recycled items and he so energizes the audience that it becomes his orchestra, Jinright said.

Jinright was a “child” among the children. Jonas taught them all that what is put into the heart can come out as music.

“If you open your creativity and your minds you can be a musician for the rest of your lives,” Jonas told the children. “There’s joy in singing. Your minds are your imagination stations. Active your stations! Activate your stations!”

“Music is so important for developing young minds,” she said. It touches the brain, body and spirit of the child. All have the opportunity to express themselves in a positive way.”

The Billy Jonas Concert tonight will be family oriented and fun and “extra” entertaining for all ages.

“Tonight will be a celebration of community in song,” Jonas said. “The audience will become the orchestra, through a subtle, magical process of sonic alchemy. Our band will be conductors and instigators of consonant confluence – that means it’s our job to sound good and make it easy and fun for the audience to sound good.”

Tickets for tonight’s Billy Jonas Concert will be available at the door. Tickets are $20 each. Children under age 12 will be admitted free with a paid admission.

Patron season tickets will also be available and will include admission to the Billy Jonas Concert.