Trojans prepare for time off before MTSU 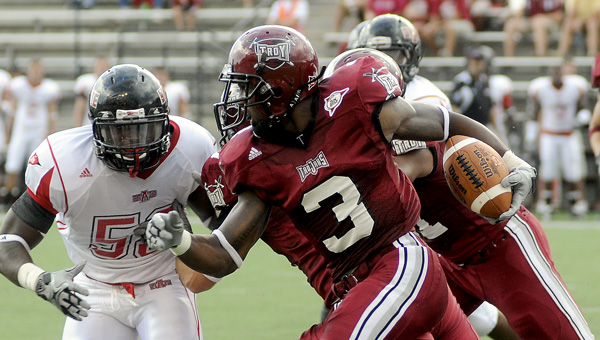 The Troy Trojans walked back into Veterans Memorial Stadium on Saturday afternoon and came away with a much-needed victory later that night.

But that victory almost did not happen, if not for a five-play, 28-second drive that ended with Shawn Southland in the end zone, and the Trojans with the lead.

“It was anybody’s game at the end of the game there,” head coach Larry Blakeney said of the 35-28 victory.

“I think we got better in some areas (during Saturday’s game).

“What I saw, I think we played hard on defense – but we are not still not over the hump just yet,” the coach added.

As for the final drive and play, the coach said it was one the team had tried before during a game.

“It was a great response by our offense,” the head ball coach said.

“Gotta give (offensive coordinator) Kenny Edenfield and Shawn (Southward) credit for it.

“Shawn made a great catch, and that was a play that we have run earlier in the season and he dropped the pass.”

The win improved the Trojans to 2-2 overall, and 1-0 in Sun Belt play.

The last-second victory also snapped a two game losing streak, where the Trojans lost to Oklahoma State and UAB by a combine d score of four points.

Both Troy victories have come in the final moments of the game, and by a combined 10 points, thanks to a three-point win over Blowing Green and the seven-point win over the Red Wolves.

The Trojans won by 10 points or less only twice last season, against Arkansas State 30-27 and Florida International, 42-33.

Both games took place on the road.

Now, Troy will have to wait 10 days before an opportunity at improving its record above .500 – and it will do so on national television.

In the annual “Battle for the Palladium” the Trojans will travel to Murfreesboro, TN., to take on bitter conference rival Middle Tennessee State in a game that will be shown on ESPN 2.

“I think it’s a good time to give them a day or two off, but of course, they got to handle it well.

“I like having some rest. We got a win to build on – but we are certainly in need of some time to recover,” he said.

While it may be a shorter week than most that does not mean it will take away from the stress provided on a normal game week.

“They have a good program,” Blakeney said about MTSU.

“They are well coached and they are going to be coming after us.

“We got the best of them lately, but we are expecting their shot.

“The winner of this game will be the favorite moving on,” he added.

This will be the latest entry in a series that dates all the way back to 1936, with Troy leading 11-6 all-time.

As for the most recent meetings, the Trojans have had the Palladium trophy for the past four seasons, thanks to its four-game winning streak over the Blue Raiders.

“I think we are going into it knowing this is the biggest game of the season. It’s going to help that we will have some confidence going in.”

The quarterback finished 18-for-38, tossing for 316 yards, two touchdowns and an interception.

Like his coach, Robinson said a few days off would do the team some justice.

“Some extra time is going to help us get better, especially on the offensive line, who sis a fantastic job for us on Saturday).

“Coach always talks about the Middle Ten. game and going into it with some rest will help,” he added.

“We want to embarrass them on national television, we don’t want to be the ones embarrassed.”

On the Trojans’ final drive, Robinson completed 3-of-4 passes, leading the way for his team.

Two of those passes were caught by senior wide receiver, Jerrel Jernigan, during what would turn out to be a career day.

Jernigan would finish the game with 10 catches for a career-high 209 receiving yards and a touchdown.

On Monday he was announced as the Sun Belt Offensive Player of the Week for the second time this season.

“He is a fierce competitor and he likes to win. You can see his jets come on when he gets it in the grass,” Blakeney said.

“He is going to be in the Troy Hall of Fame, I’ll say that.”

As for the receiver himself, all he wanted this past weekend was a win.

“As long as we can get the win, that’s all that matters,” Jernigan said