Tigers prove too much for Trojans 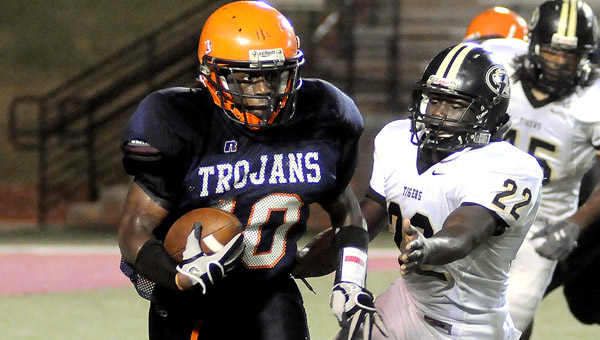 In a rivalry game where both teams were looking to set the tone early, it was the visiting team that imposed its will from first kickoff to the last snap.

Charles Henderson was looking to bounce back from a 40-0 shutout to the hands of Valley last week.

However, Greenville was not about to give the Trojans that satisfaction, as the Tigers came in to Veterans Memorial Stadium, and left with a 35-21 win.

“This was a tough game to lose,” CHHS head coach Hugh Fountain said following the loss.

“This was a game that had no region impact, but one that this team wanted to win personally.

“We just did a poor job of executing (Friday night) and it hurt us,” the coach added.

On the very first possession of the game, GHS took the ball 73 yards down the field, collecting four first down and nearly seven minutes off the clock, before sophomore quarterback Kent Riley would score on a two-yard touchdown, putting his team up 6-0 after a missed extra point.

The Trojans had the football for a total of seven seconds before GHS caused and recovered a fumble on the ensuing kickoff.

Just two plays later Jamall Hamilton would score on a seven-yard run, putting his team up 12-0, after another missed extra point.

CHHS would struggle all throughout the first quarter, as the Trojans would run just eight plays for 40 yards.

Another Riley touchdown run, set up by a Quintus Moss fumble, put the Tigers up 18-0 towards the end of the second quarter.

CHHS would strike back before the first half would come to a close, as Corey Dennis would find Laquavious Bryant on a 17-yard pitch and catch to complete a 30-yard Trojan scoring drive and in the process, cut the lead to 18-7 at the half.

After a CHHS missed field goal to start the second half, GHS would get the ball and go 83 yards to the end zone in just three plays, thanks to a Hamilton 56-yar run.

Again, the Trojans made things interesting, this time finding the end zone in just two plays, after a Dennis 32-yard pass to Robert Lee, set up a moss 45-yard touchdown run, cutting the lead to 11 points.

The Tigers would respond with 10 more points in its next two possessions to put 35 on the board.

While a late fourth quarter touchdown run by Dennis would bring CHHS closer, it would be the last time the Trojans had the ball, as GHS would run the clock out to secure the win.

“Ball security played a big role in the game,” Fountain said. “They were able to hold on to the ball and we were not.

“They were able to score right away and then we gave them the ball right back, which set up their second score.”

Fountain said his team still had a strong mindset, despite the early double-digit deficit.

“We knew we were going to have to fight through this, and the kids were willing to do it.

“I think we fought hard the whole ball game. But Greenville is a great team, on the same caliber as Valley, and in games like that, you can’t make the mistakes that we made,” the coach said.

Riley finished the game 10-15 through the air for 76 yards, while rushing for another 85 and three scores.

Hamilton was the game’s leading rusher with 120 yards off of 12 carries.

The Trojan counterparts put up impressive numbers as well, as Dennis finished with 150 yards and a touchdown through the air, while rushing for another 43 yards and another score.

Moss finished with 11 carries for 60 yards and a touchdown.

“It’s pretty frustrating to be where we are offensively,” Moss said.

“We are being faced with a lot of adversity right now, and this is our time to step up and play with it.

“We gotta start playing better than how we have been playing – we are a better team than the past two games show,” the senior said.

CHHs lost the turnover battle, 2-1, as the Trojans fumbled the ball four times.

“We got to learn from our mistakes,” Fountain said.

“Greenville is a good team, and they played well tonight, but we can’t turnover the ball and commit penalties if we want to be the team that I know we can be.”

The Trojans will look to get back to .500 with a win over Russell County next Friday night as the team will celebrate its Homecoming.