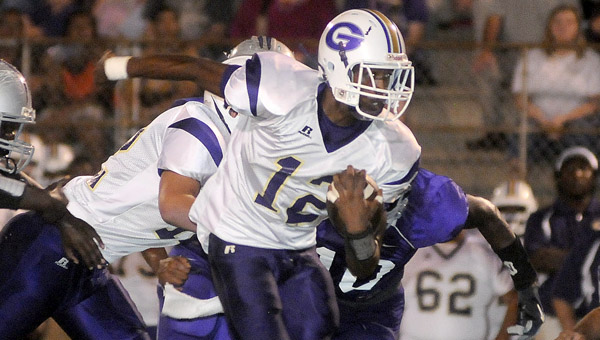 When the fourth-quarter game clock struck zero in Bulldog Stadium Friday night it was evident who the better team was on the field. Goshen outmanned the Pike county Bulldogs by a final score of 47-24, and down the stretch of the ballgame the Eagles offense flexed even more.

The usual suspects for the Goshen Eagles kept the ball on the ground for every play but one in the victory Friday night. Reginald Foster posted 158 yards on 20 carries with four touhdowns.

One of Foster’s four scores was an interception he returned for six points. Quarterback Jerome Lawrence posted two rushing touchdowns, and Marcus Jackson ran the ball 16 times against the Bulldogs and rolled up 113 yards and a touchdown.

Jackson said that while the tandem had a great night running the ball, the credit goes to the guys up front.

“When we run the ball, we don’t really have to make many moves at all,” Jackson said.

The Eagles did run the ball successfully though Friday night,and they were sure to thank their line after the game. Lawrence attempted and completed just one pass on Friday night.

That pass was good for eight yards. The Eagles ground game carried the rest of the load posting 388 yards.

“We only attempted on pass tonight because our offensive line did such a great job,” Goshen head coach Bart Snyder said.

“The play of the offensive and defensive lines was the difference in the game tonight for us. We challenged them at practice this week and they showed up big tonight. Our offensive line was under sized compared to their defensive line, and our guys outplayed them. I’m very proud of this team and how they played tonight.”

The Goshen Eagles scored with 11:16 left to play in the first half on a 23-yard touchdown run from Marcus Jackson, and from that point on they never looked back. Goshen ended a shootout type game when they quickly responded with another touchdown after defensive back Rodney Williams intercepted a Jerelle Bailey pass. The Eagles punched in another touchdown with 9:09 left in the half when Reginald Foster danced to the end zone from 22-yards away. Goshen took a 21-12 lead on the home standing Bulldogs, and the Eagles were just getting started.

The Bulldogs hit the scoreboard first in the contest when they posted a six-play, 66-yard drive capped off by a 21-yard touchdown run from Raheem Pearison.

The drive took just 2:11, and Pearison blazed the Goshen defense in his run to the end zone as the Bulldogs offense worked effectively and easily against the Eagles defense. The point after failed though, and the Bulldogs led 6-0 with 9:40 left to play in the opening quarter.

Goshen responded though with an eight-play, 70-yard drive in just 3:36.

Foster capped off the drive with a two-yard touchdown run. The Eagles point after sailed through, and Goshen led 7-6 with 6:04 left in the opening quarter. The Bulldogs drove 76 yards in their response that ended with a 33-yard touchdown pass from Bailey to receiver Quadry Greasham.

That too was a quick drive at just under three minutes, and it became evident to fans in attendance that a shootout was in the process.

Pike County took a 12-7 lead to the second quarter, but the Bulldogs never led the game again.

Goshen would go into the locker room with a 28-18 lead, and the Eagles opened with a quick touchdown to start the third quarter. The visitors marched downfield, and executed a Ten-play drive that used almost six minutes on the third quarter clock.

Lawrence scored form six yards out on fourth down, and the Eagles took a 35-18 lead with 6:28 left to play in the third quarter.

Foster snagged a 52-yard interception and raced to the end zone, and the Eagles methodically punched in another touchdown on their next offensive possession tallying the score at 47-18.

Pike County scored the final touchdown of the night with 7:16 left to play, but at that point the misery was invading the Bulldogs sideline as the game was out of reach.

“Credit them, they got that one extra touchdown on us to end the shootout,” Bulldogs head coach Robert Johnson said.

“They just outplayed us tonight in the game. They are a great football team. Hats off to Coach Snyder and his staff and his team. They really did a great job tonight.”