Looking through the lens 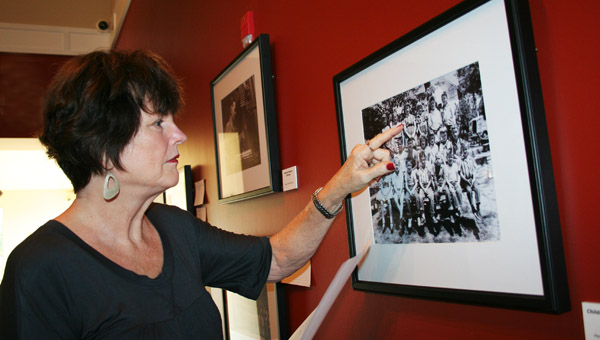 From a list provided by a visitor to the "Looking Through the Lens" exhibit at the Johnson Center for the Arts, Wiley White, development director, identifies children in a 1959 photograph taken at "Miss Julia's" kindergarten in Troy. A reception for the exhibition will be from 2 until 4 p.m. Sunday. The public is invited. (Photo/Jaine Treadwell)

The Johnson Center for the Arts will host a reception for the “Looking Through the Lens” exhibition from 2 until 4 p.m. on Sunday, Sept. 26. The public is invited.

The exhibition features the photography of Holman Johnson of Troy and D.L. Hightower of Clayton. The works of the two photographers spans nearly a century.

Johnson (1910-1990) served in the Navy during World War II where he became a photographer. He opened a photography business in Troy in 1946 and continued in business until his death.

Hightower (1899-1993) was an amateur photographer from Clayton and photographed people, places and activities he believed future generations would not know otherwise.

“‘Looking Through The Lens” celebrates the lives of two South Alabama photographers,” said Richard Metzger, arts center executive director. “The exhibition is a wonderful look back at the way things were and are.”

Metzger said the Johnson Center for the Arts is looking forward to the reception and having people from Barbour County area join local residents for the special occasion.

“Looking through the Lens” is an interactive exhibit,” Metzger said. “Many of the people in the photographs were not identified and we invite visitors to the Johnson Center to help us identify the people and the places.”

“We had someone come in the other day who was able to identify all the children in the 1959 photograph of “Miss” Julia Walter’s Kindergarten,” White said.

“One photograph that impressed me from the very beginning was one of a man plowing an ox and titled ‘Frontier Cultivation,’” White said. “I had often wondered how that photograph happened to be taken. Was Holman Johnson riding along the road and just happened to see the man plowing or was it planned? I couldn’t help but wonder.”

Then just the other day, Aldredge Slaughter visited the museum and identified the man in the photograph as his grandfather, Aldredge “Boots” Slaughter and the ox as Jack.

“Aldredge said the photograph was taken around 1944 on his grandfather’s farm in Good Hope,” White said. “And what made the photograph even more interesting was that Mr. Slaughter was the assistant postmaster in Troy and worked in the post office that is now the Johnson Center for the Arts from 1928 until 1965. On his days off, Mr. Slaughter farmed.”

White said those who visit the “Looking Through the Lens” exhibition just might see someone they know looking back at them from a photograph or they might even see themselves as they looked years ago.

The “Looking Through the Lens” exhibition is sponsored by the Alabama State Council on the Arts, Sen. Wendell Mitchell, the Manuel and Mary Johnson Foundation and The Messenger.

Admission to the Johnson Center for the Arts is always free. Center hours are 10 a.m. until 5 p.m. Tuesday through Saturday.