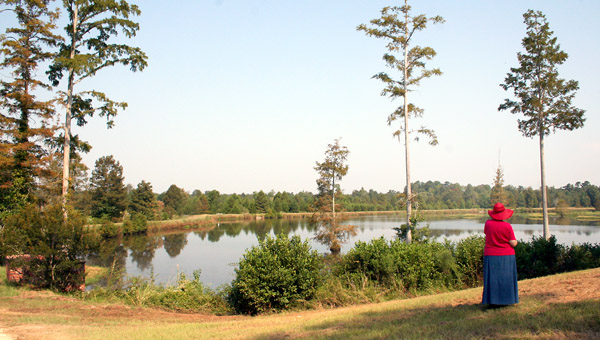 The cypress pond at the Renfroe family farm is just one of many impress sites partcipants in the ATFA tour group enjoyed on Saturday.

Those who rode the wagons to the “brink” of Pike County Saturday morning couldn’t believe their eyes.

“This is Pike County?” was the collective observation.

The Conference opened on Friday with activities and events at Cattleman Park and continued Saturday with a tour of Gene and Jana Renfroe’s Farm, “Joyes,” in western Pike County.

“Everyone was amazed at the beauty of Pike County, especially, the great views that we have from the high rolling hills,” Roling said. “The Renfroes’ farm is a TREASURE Forest and, when riding, the 3,000 acres, you can understand why. It is one of the prettiest and best managed farms that you will see anywhere.”

Gene Renfroe served as guide on part of the wagon tour that included 12 points of interest and four presentations – house, cogongrass, wetlands and hardwood.

At each presentation stop, the wagons were unloaded and participants had opportunities to explore those areas of particular interest.

The “oooh” and “aaah” stops were at the Renfroe cabin, where the view was spectacular, the cypress pond where bass were jumping and the duck pond where a stroll across the boardwalk was almost like walking on water.

“Joyes” has been in the Renfroe family since the mid-1800s. Gene Renfroe is a fourth generation owner.

Although the farm was originally a row crop operation that was worked, for a time, by German POWs, Gene and Jana Renfroe “manage” the farm primarily for timber and recreation.

“Our singular focus is pine trees,” Renfroe said. “But we still have a hardwood/mixed forest. We had about 2,600 pecan trees but lost about 1,300 of those when Hurricane Opal came through in 1995. We also lost hardwoods and the loss of hardwoods was especially sad since it was the larger red oaks, cherry barks and swamp chestnuts that were blown down.”

The 2010 Alabama Treasure Forest Association Tour included a presentation on Cogongrass, which is an invasive plant that can devastate a forest if it ever gets much more than a toehold on the land, said Gary Cole, regional forester Alabama Forestry Commission.

“Cogongrass is very prolific and it can kill everything in sight but there are chemicals that can take care of it without inhibiting other plants,” he said.

The tour included the cypress pond and duck pond, which are part of Joyes’ wetlands (50 percent of all wetlands in the United States are in the Southeast).

The “tourists” left the comfort of the wagons to cross the boardwalk on foot and enjoy the winging of the egrets and knobbing of the cypress knees.

“The tour of the Renfroe farm wonderful,” said Tammy Powell, a member of the host association. “It was amazing to see what can be done to improve a piece of property. What Gene and Jana have done with their farm is outstanding. The scene from where you stand atop that knoll is breathtaking. They have made a TREASURE Forest a treasure for Pike County.”