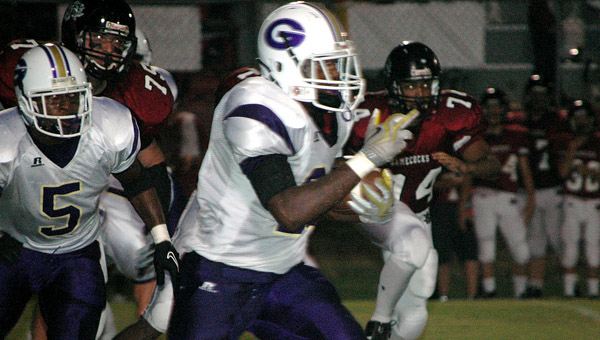 The Goshen Eagles traveled to New Brockton Friday night with a mission to outrun the Gamecocks.

That is exactly what happened as the Eagles, led by junior running back Reginald Foster, pounded it out on the ground for a 33-12 win.

The first half opened up as Jerome Lawrence had an interception inside the red zone to stop the Gamecock’s scoring drive.

Two plays into their first offensive series Foster took the ball 82 yards into the end zone for the first score of the game.

The PAT snap was botched allowing Lawrence to run the ball into the corner for a 2-point conversion taking the score to 8-0 with 5:31 left in the quarter.

The next scoring opportunity came by way of another interception by Lawrence, his second of the half.

That same would drive end with a fake punt by Goshen resulting in a fumble picked up by NBHS.

Fumbles were the only thing that grounded the Eagles from really opening the game up, as the team dropped the ball three different times.

“(The ground game) really controlled the offensive side of the ball except for those fumbles,” head coach Bart Snyder said, adding that his team would have to work on that in the upcoming week of practice.

NBHS got back into the game thanks to a roughing the kicker penalty on a crucial fourth down play, giving them an automatic first down and eventually leading to a 16-yard touchdown run, cutting the lead to 8-6 with 2:45 left in the first half.

The running attack of Foster answered right back on the first offensive play with a 55-yard touchdown run down the sidelines, taking the score to 15-6 to go into the half.

Goshen opened up the second half the same way it ended the first half – running the football.

No one was left out of the game plan as everyone got touches and positive yards, continuing to run the clock down.

Like he did earlier, Foster would step up for his team, as he had two more touchdowns in the second half, including another long yardage run, this time taking it in from 72 yards out.

At the end of the 3rd quarter the scoreboard saw Goshen with a 27-6 lead.

Marcus Jackson ran the show, and the clock, taking most of the carries in the fourth quarter including two wholes drives, scoring once.

Totaling approximately 60 yards, after the game suffering from symptoms of dehydration but walked off the field under his own power.

As the whistle blew on the final play Foster had racked up almost 275 yards on the ground, resulting in 4 touchdowns.

Lawrence helped his offense out with 2 interceptions on the defensive side of the ball.

Next week Goshen takes the short trip over to in-region rival Pike County.