Trojans no match for Rams 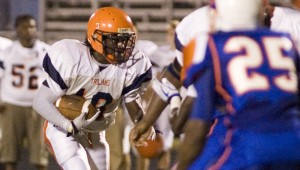 VALLEY – Early in the week, Valley coach Mike McCombs expressed concern because his Rams had not been tested in region play and Charles Henderson was coming into Ram Stadium a much-improved team.

The Ram defense kept the Trojan (2-2, 1-2) offense in check early, forcing a punt after only four plays.

Once again, the Valley line controlled the trenches as the Ram offense quickly moved the ball down to the Charles Henderson 10-yard line. From there, Florence threw a pass to Desmond Reece on a slant pattern for the touchdown with 3:14 remaining in the first quarter. With the extra point, Valley was up 14-0.

The Trojans mounted what seemed to be a promising drive, but on fourth-and-2 at the Valley 20-yard line, the Ram defense stopped a power play a yard short of the first down.

While the Valley scoring slowed down in the second quarter, Florence continued to pile up yardage. After driving the ball down to the Trojan 1-yard line, Florence came out of the game his twin brother, Eriquel Florence, gained the final yard for the touchdown to put the Rams up, 20-0 at the half.

Charles Henderson took the second half kickoff and once again showed some teeth driving down to the Valley 11-yard line before Areka Jackson hit the Trojan runner in the backfield, stripped him of the ball and raced 45 yards to the Charles Henderson 40-yard line.

Again, Florence found the end zone on third down with a 37-yard scamper with 3:55 left in the third quarter. The extra point conversion was good and Valley lead, 27-0.

Two fourth-quarter runs by C.J. Moore and John Jackson pushed the Valley total to 40-0 over Charles Henderson. For the game Florence rushed 19 times for 218 yards and two touchdowns while also completing seven of his 12 passes for 88 yards and a touchdown.

As a team, Valley rushed 41 times for 370 yards. With Florence’s passing yards, Valley totaled 458 yards offense. Charles Henderson was held to a total of 153 yards offense.

After the game, McCombs expressed concerns with his team’s sloppy play, but praised his offensive linemen and their coach, Matthew Wells.

Valley will be at home next week against arch-rival Lanett.