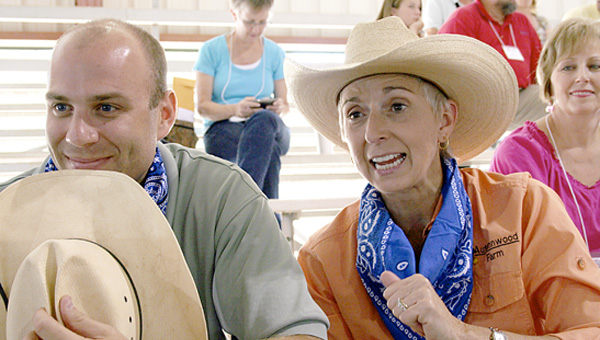 Those who attended the Alabama TREASURE Forest Association Conference at Cattleman Park on Friday won’t soon forget what they saw and heard there.

Nearly 200 members and friends of the Alabama TREASURE Forest Association attended afternoon workshops that included topics ranging from selling timber to feral hog management. But what had them really talking was the performance by the Troy University Rodeo Team.

Emcees Josh Simmons, rodeo coach, and Will Bradley, team captain, provided the audience with interesting insights into the sport of rodeo while the team provided thrills in the arena.

Keith Roling, president of the hosting Pike County TREASURE Forest Association, said it was a real honor for the Pike County association to have been selected to host the annual conference and tour.

“We’re not Gulf Shores or Joe Wheeler State Park but we have a lot to offer,” Roling said. “The rodeo was a great success, the workshops were very informative and I’m sure everyone will enjoy the prayer breakfast and tour of Gene and Jana Renfroe’s TREASURE Forest Saturday. Their farm is really something to see. The Pike County TREASURE Forest Association is proud to have had this opportunity.”

The primary goal of the Alabama TREASURE Forest Association is to spread the word about responsible forest management so that all forestlands in Alabama are managed according to the TREASURE Forest philosophy of sensitivity to environmental concerns and strict adherence to the codes of good stewardship.

James Malone, Alabama Treasure Forest Association executive director, said the purpose of the annual Alabama TREASURE Forest Association Conference and Tour is to bring members together to share ideas and to draw in those who are also friends of the forest.

“Alabama has 23 million acres of forestland and 90 percent of those acres are privately owned,” he said. “Alabama is one of the largest private land holding states.”

Malone attributes private land ownership versus government-owned land to the pioneer spirit of the people of Alabama and the Southeast.

“Settlers desired to own a piece of land and that desire was passed down through the generations,” he said. “Those who own land are, for the most part, good stewards. They manage the land. There’s more forestland now in Alabama than there has been since the turn of the 20th century. That’s because of good management and also because more agricultural land has been given over to forestland.”

The TREASURE Forest Association seeks to provide management choices to owners of forestland.

“Two-thirds of Alabama is forestland and that’s because of wise land use and also because we recognize that forests are more than timber,” Malone said. “Forests provide us with clean air and clean water and Alabama has some of the cleanest and that’s credit to the private landowners.”