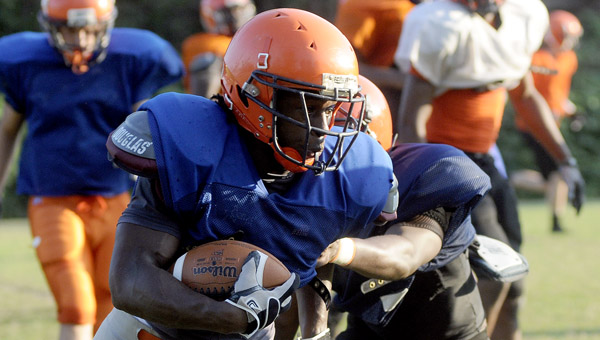 Even though it is just four weeks into the season, the Charles Henderson Trojans find themselves in a must win scenario this Friday night.

Coming off a big 34-20 victory over B.T. Washington, the Trojans now look to keep the momentum going in another big region matchup, this time against a team it has not defeated in two seasons.

CHHS will hit the road for its longest road trip of the year as it heads to the state line to seek some revenge against the Valley Rams.

“You can tell the kids know this is a must win game,” head coach Hugh Fountain said.

“We had a sense of urgency against B.T.W. but with Valley, we know we have to be ready. They are one of the teams in the upper echelon in the region.”

This will be the fourth time the two teams have met, with the Rams holding a 2-1 series lead.

After starting the season off with a loss to No. 1 Auburn at home, the Rams’ offense has scored 45 or more points in the past two games against Rehoboth and Carroll, while its defense has allowed just 12 points during that stretch.

Against the Eagles, VHS quarterback Erique Florence dominated through the air, throwing for 142 yards and two touchdowns, while completing 13 of his 15 passes.

His main target was wide receiver Desmond Reece, who had six catches for 59 yards and a touchdown against the Eagles.

“From what we have seen, they are the top team in the region,” the Trojan coach said.

What makes this an even bigger game than most other week four games, is just how much of the season can be impacted by Friday’s result. Like CHHS, Valley enters the game with a 2-1 overall record, however, the Rams have a slight edge on the Trojans since both wins have come in region play.

Currently, Russell County, VHS and Eufaula are the only remaining unbeaten in 5A Region 2.

“I think this is a very important game,” Fountain said. “It is going to be difficult to win the region with two loses.

“One of the biggest goals we have this season is to win the region title, and if we want to achieve that, we have to win this game.

“The guys know what’s at stake and they are treat it like it is – a must in game,” the coach added.

While the game may take place in a hostile environment for the third time in four weeks, the Trojans have yet to show any effects of being on the road so far this season.

Entering Friday night’s game, CHHS is 2-0 on the road, a statistic Fountain said has played a big role this season.

“A lot of the time, playing on the road is good for you. We have had some long trips this season, and we are about to go on longest of the year.

“The guys have done a good job of focusing during those games,” the coach said. “They raise their level of competition (on the road).”

Another statistic that may benefit CHHS is its play towards the end of the game.

This season, the Trojans have outscored its opponents 40-7 in the fourth quarter, which is a major improvement form the 2009 season, when the team lost four of its five game in the final quarter.

“It’s good to see us playing so hard at the end of the game,” Fountain said.

“Even in the Tallassee game, we fought back. No game is ever over with this team. And that’s a big difference from last year.

“But if we want to win (this week) we can’t wait until the fourth quarter – we got to play all four quarters,” he added.

The Trojans and the Rams look to keep the hopes of winning a region title alive this Friday night, with a kickoff scheduled for 7 p.m.