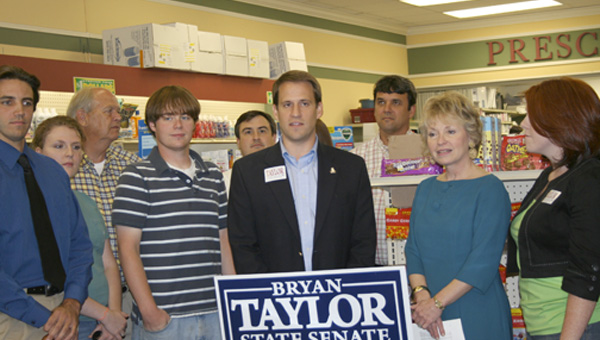 Republican candidate Bryan Taylor earned the endorsement of the National Federation of Independent Business in his bid for state senate.

The National Federation of Independent Business has endorsed Bryan Taylor in the District 30 Senate Race.

The endorsement was made by the NFIB/Alabama Save America’s Free Enterprise Trust at noon Tuesday at Byrd’s Drugs in downtown Troy.

Rosemary Elebash, state director of NFIB/Alabama, said the NFIB’s endorsement is critical to Taylor’s bid for the Senate seat and is based on Taylor’s positions and records on small business issues.

“Small business in the backbone of Alabama’s economy and it’s critically important to have a legislature that supports free enterprise,” Elebash said.

“NFIB supports the candidates who support small business and Bryan Taylor will do that. Our members know that he is committed to helping small businesses grow and create jobs.”

Taylor spoke to a crowd of local supporters who gather at Byrd’s for the announcement of the NFIB’s endorsement.

“I am honored to receive the endorsement of the National Federation of Independent Business,” he said. “Small business is the heart and soul of Alabama’s economy and I will do everything I can to help the state small businesses grow and prosper.”

Taylor said that he is dedicated to the creation of jobs via small business.

“We must unleash the free enterprise system and let it do what it does best, create jobs,” he said. “I am a champion for small business. Small businesses need to be successful.”

Taylor said his goal is to create an atmosphere where small businesses can succeed in Alabama. He took incumbent Sen. Wendell Mitchell’s voting record to task.

“Sen. Mitchell has walked away from small business. It is time for new Senate leadership in Alabama.”

Taylor said he wants to debate the issues with Mitchell at town meetings in District 30. However, he said Mitchell has not responded to his request.

“I want the voters in District 30 to be able to make an informed decision [when they go to the polls],” Taylor said. The district includes Pike, Butler and Crenshaw counties and parts of Autauga, Elmore and Lowndes counties.