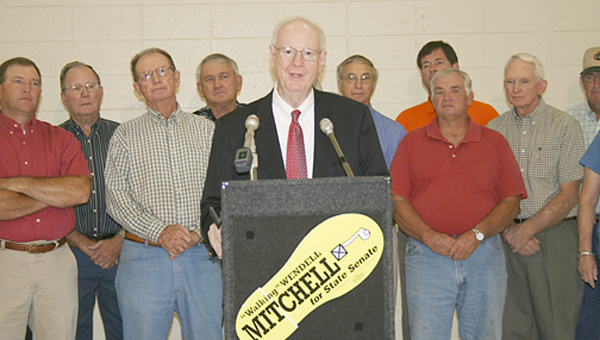 Sen. Wendell Mitchell received endorsements Tuesday from local farmers and other Pike County leaders during a press conference at Cattleman Park.
Mitchell represents Senate District 30, which includes Pike, Butler and Crenshaw counties and parts of Autauga, Elmore and Lowndes counties. He is seeking re-election to his eighth four-year term.
John Dorrill, president of the Pike County Farmers Federation, spoke of Mitchell’s support for agriculture and rural Alabama.
Dorrill said that Mitchell sponsored and helped pass a bill important to cattle producers that updated the state veterinarian’s responsibilities to include the care of livestock and strengthened penalities for animal cruelty by establishing minimum fines for repeat offenders.
The law precludes local and county governments from establishing a patchwork of different laws governing livestock care and handling.
“Without this protection farmers could see regulations enacted that would cripple the state’s livestock industry and hinder economic growth,” Dorrill said.
Mitchell sponsored a bill that now allows law enforcement officers to seize equipment in the possession of a person charged with a felony offense involving the theft of timber or lumber.
“Sen. Mitchell also sponsored a bill that changed audit requirements of producer-funded checkoff programs so that the audits can be conducted every two years rather than annually, saving thousands of dollars in accounting fees each year,” Dorrill said.
Bill Hixon, a Pike County Farmers Federation and Pike County Cattlemen’s Association board member, said that had it not been for Mitchell’s support of Cattleman Park, it might not have become a reality.
“Sen. Mitchell provided seed money for the project and that is just the tip of the iceberg of what he has done for the people of Pike County,” he said.
“He has helped organizations from one end of the county to the other. He has made a positive difference for the people of Pike County.
Pike County Sheriff Russell Thomas said Mitchell has been a strong supporter of law enforcement for 28 years.
“Sen. Mitchell is a statesman in every sense of the word,” Thomas said. “He is an outstanding example of what a state senator should be. We need wisdom and experience in our senator. We need Wendell Mitchell.”
Mitchell expressed appreciation for the endorsements and pledged his continued support over the next four years.
“Six months ago, I couldn’t be certain that I would be standing here addressing re-election,” Mitchell said in reference to his recent illness.
“I have been blessed by God and with so many prayers. I’m ready to continue to serve.”