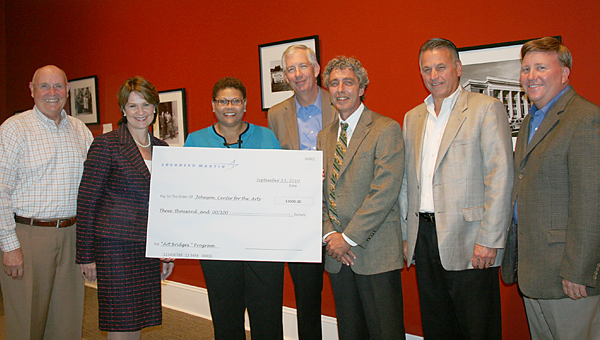 Mack Gibson, chair of the Troy-Pike Cultural Arts Foundation, is not often at a loss for words but he found himself in that situation Monday night. But only for a minute.

He then took a deep breath, folder his arms and let a slow smile spread across his face.

“The Johnson Center for the Arts has another corporate sponsor,” he said. “I cannot tell you what it means to have a world-wide corporation like Lockheed Martin come on board. For Lockheed Martin to step up and take ownership and become a part of what we do to provide arts education for the children in Pike County is tremendous. Their support further validates the Troy-Pike Cultural Arts Center as a cultural arts organization that has the entire community at heart.”

Gibson said there are no words to express, nor any way to calculate, what the support of Lockheed Martin means to furthering the Center’s mission toward providing the cultural enrichment of the lives of all citizens through exposure to the arts.

“Time will tell,” he said. “But we know their support will have a tremendous immediate impact on arts education as well as a far reaching one.”

Representatives from Lockheed Martin’s Pike County, Orlando and Bethesda offices were in Troy Monday night to present a check to the Troy-Pike Cultural Art Center in support of the Center’s ArtBridges program, which is an educational outreach initiative.

“The arts benefit the entire community,” he said. “Lockheed Martin is proud to be a part of the ArtBridges program. The kids will benefit from it now and in the future. It will be a bridge to the arts in the community.”

Richard Metzger, executive director of the arts center, said ArtBridges began in July with two successful teacher workshops in which the teachers explored ways to connect visual arts with the Alabama Course of Study Standards in language arts, social studies, science and math.

“We are firmly committed to bringing standards-base and integrated arts education into the schools in Pike County,” Metzger said.

“Dr. Mark Bazzell, superintendent of Pike County Schools, has asked us to bring the ArtBridges program into 61 classrooms this fall. This program will include grades three through five and possibly six.”

Metzger said the funds that Lockheed Martin has committed will be used to purchase supplies for in-school instruction and also to transport students to exhibitions at the Johnson Center for the Arts.

“Lockheed Martin is making it possible for hundreds of students to have arts experience that would not be possible otherwise,” he said.

“There is no way that we can put a price on the return of their investment. It is priceless.”