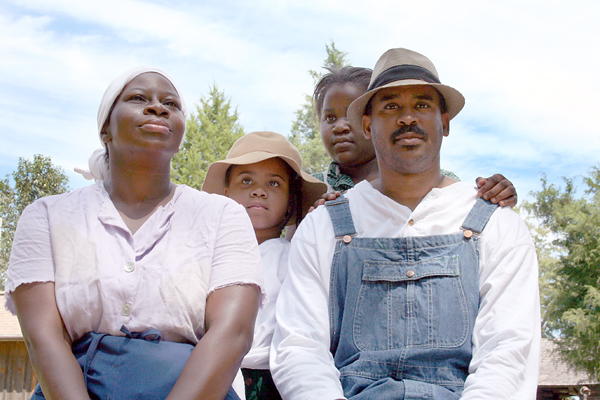 “Sho’ Nuff, Roxie” is the story of African-American sharecroppers during the turn of the 20th century.

Not quite, said Faye Walker Howell, director and playwright.

“This is a documentary that goes beyond the surface of a story to tell what life was really like for African-American sharecroppers during this period,” Howell said. “It is based on family history and does, I believe, truly portray the struggles of these people and how they survived and overcame the many hardships they faced.”

Much of the documentary was shot at the Pioneer Museum of Alabama, which provided an authentic backdrop for the story that unfolds in dramatic fashion.

The history African-Americans from Southeast Alabama is rather sketchy, Howell said.

“We can’t trace our history very far because it was not documented,” she said. “So, there will be generations that don’t know what life was like for African-Americans in Southeast Alabama unless we tell it. We want future generations to be aware of things that went on and how our ancestors lived. They need to have an idea of the struggles and how they endured and overcame.”

Howell’s family can be traced from Tennessee to the Henry and Houston county areas. It was from the elders in the family that she heard the stories that have been passed down through the oral tradition.

Those books helped prepare her to write the script for a docu-drama that has the potential to have a far-reaching impact.

“Twelve years of research have gone into the telling of “Sho’ Nuff, Roxie” and Howell is confident that the story she tells is one that was told over and over again in the African-American “quarters” in the early- to mid- 1900s. The same story. Just different characters.

“Roxie was my great-great-grandmother,” Howell said. “She was the granddaughter of a wealthy plantation owner. Her mother was the daughter of the plantation owner but her daddy was a black sharecropper. They were playmates as children and grew very fond of each other and fell in love.”

Roxie was raised in the “quarters” and the secret surrounding her was very guarded.

The “Sho’ Nuff” real story has been passed down from Roxie through the generations and is now being told for future generations so that they may better understand, Howell said.

Sharecropping is a system of agriculture in which a landowner allows a “cropper” to use the land in return for a share of the crop produced on the land. It was commonly known as farming on halves.

For an African-American who had no land, no mule or plow and little means, sharecropping was a way to eek out a living.

“But, too, often it didn’t work that way, Howell said.

With little or no education, it was easy for unethical landowners to take advantage of the croppers and they often did so, Howell said.

“Many African-American sharecroppers were cheated and of what they earned and what they were owed,” she said.

“Making the struggles and hardships even worse and overcoming them more difficult.”

But through faith, diligence and sheer will, many of the sharecroppers did overcome the situation and circumstances of their lives.

“Sho’ Nuff, Roxie” is the story of overcoming.

“It’s a powerful story and it is told by a very good cast,” Howell said. “Everyone is committed to making this docu-drama a great success.”

“Sho’ Nuff, Roxie” was previewed at the Legends of the Fall festival in Chipley, Florida and received great audience reviews. Howell, too, was pleased.

“We were proud to have the opportunity to present “Sho’ Nuff, Roxie’ before a live audience and we are anxious to make it available to the public,” Howell said. “Hopefully, the docu-drama will be aired on cable stations and our goal is for it to be shown on the History Channel. We want to get the message out to young people — to everyone — about the plight of African-American sharecroppers.”

In the fall, ‘Sho’ Nuff, Roxie’ will return to the Pioneer Museum of Alabama, where it will be performed at the amphitheater.

Those who can, do teach

The faculty exhibit is underway at Malone Gallery. Those who give any credence to the old cliché that “those who... read more