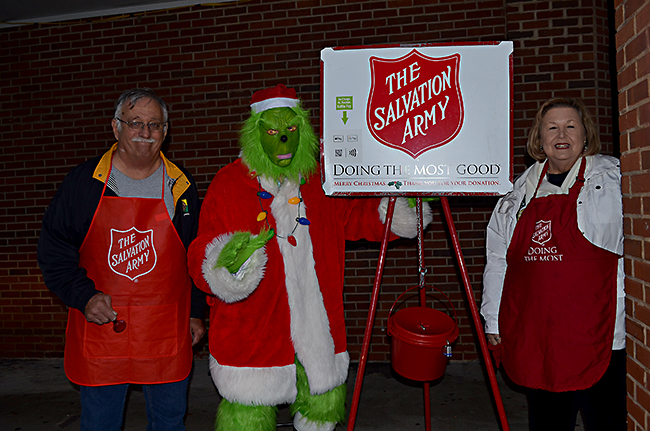 Every year, Mr. Grinch comes out of the cave where he lives a solitary existence. Just why he emerges from the cave at the Christmas time of year, no one is sure. But when he stands atop Mount Crumpet and looks down on his Christmas celebrating neighbors in Whoville. He gets foot-stomping mad.

“All that cheerful noise makes me mad,” Mr. Grinch said and he decides to quieten all the noise in Whoville by steal Christmas.

Everyone knows what a mean-one Mr. Grinch is but, is he really that mean? Does he not want Christmas to come?

Mr. Grinch was in Brundidge this week. He went around town giving out candy treats to the local merchants and to people on the streets. Not such a mean-one?

And, then, on Saturday, Mr. Grinch was ringing the Salvation Army’s bell for the Brundidge Rotary Club at the Pig. Not such mean one?

Mr. Grinåçch said Christmas is time to be thoughtful and kind and to remember the real reason for the season, the birth of the Christ Child. And, Mr. Grinch said, Christmas is also time for giving to the unfortunate. And, that’s what the Salvation Army’s Red Kettle campaign is all about – giving to others.

“We only have a few days left to ring the bell at the red kettles and we need bell ringers,” Kidd said. “We encourage those who have an hour or more to ring the bell to please call 334-808-1069.

“The Red Kettle Campaign makes it possible for us to help people here at home with needs during the winter months and throughout the year. The needs are many at this time. We are so thankful for the bell ringers and all who give.”