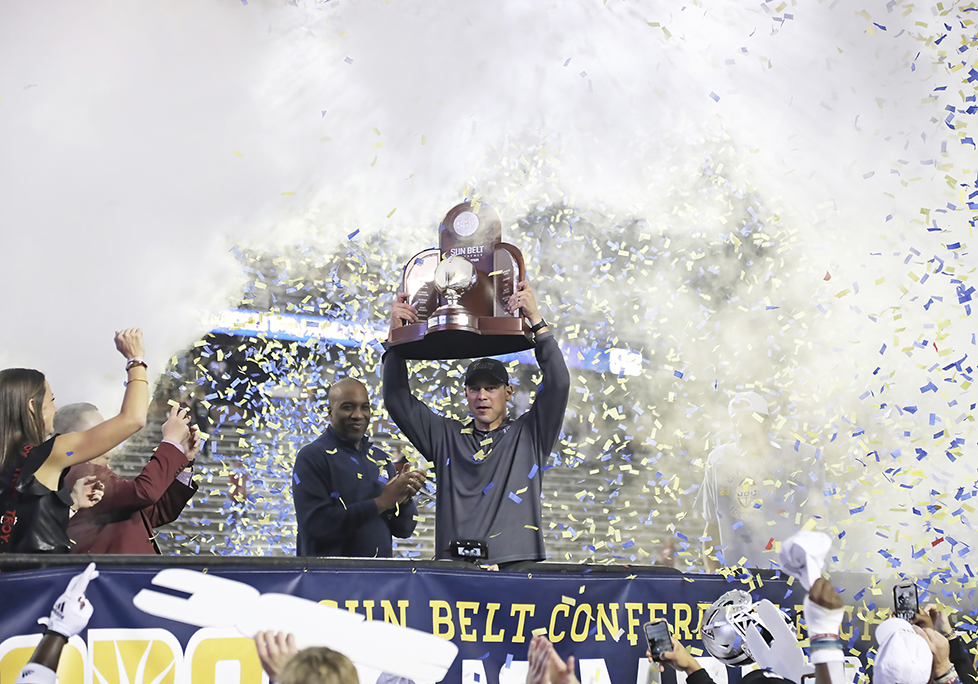 The goal posts came down on Saturday, as the Troy Trojans (11-2) are Sun Belt Conference Football Champions for the seventh time in school history, knocking off the Coastal Carolina Chanticleers (9-3) by a score of 45-26.

Troy came out swinging, scoring 31 unanswered points to start the game, and the early onslaught was far too much to overcome. The final stat book actually had Coastal outgain Troy 432 yards to 411 in the end but the Trojans also forced two turnovers. The difference, though, was the quick start as Troy outgained Coastal 306-104 in the first half and forced three three-and-outs and two turnovers on downs in the first five Coastal drives. The Trojans spent the entirety of the fourth quarter eating clock.

“I’m really proud of our guys for the way they’ve fought through adversity all year and the character they’ve shown,” Troy coach Jon Sumrall said. “This bunch has earned it. They adjusted to a lot of changes that were probably not very comfortable at first and I could not be more proud to be the head coach of the Troy Trojans.”

The story coming into the game was whether or not Coastal’s Sun Belt Player of the Year Grayson McCall would play – as he has missed the past three weeks with a foot injury – and he ended up playing the entirety of the game. Troy came out on fire, though, scoring 31 unanswered points before the Chanticleers finally got on the scoreboard. Troy also scored on its opening possession for the first time since October.

Trojan kicker Brooks Buce hit a 35-yard field goal to give Troy a 3-0 lead with 11:07 left in the first quarter. Troy extended the lead to 10-0 with 9:28 left in the opening period on a 65-yard touchdown pass from Gunnar Watson to Deshon Stoudemire. 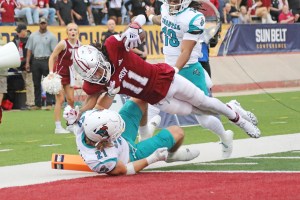 Deshon Stoudemire dives into the end-zone for a Troy touchdown against Coastal Carolina. (Photo by Henry Otto/Creative Media Images)

“I think we had a really good plan for them,” Watson said. “It just seemed like everything was going right for us (early). When we came out and got a field goal on the first drive and then scored (a touchdown) on the next drive it gave us all the momentum.”

After a Coastal three-and-out, Troy converted an 18 and 27-yard pass from Watson to Tez Johnson, and then DK Billingsley scored on an 8-yard touchdown run to extend the Trojan lead to 17-0 with 4:09 left in the first quarter.

Coastal faced a fourth-and-one from its own 34 on the next drive and opted to go for it only for Javon Solomon to drop Grayson McCall for a loss and a turnover on downs. Troy was unable to score on its next possession, however, and the Trojans retained the 17-0 lead going into the second quarter.

After another Coastal three-and-out, Watson hit Tez Johnson for a 15-yard pass and then Billingsley went untouched for a 33-yard touchdown run to extend the Trojan lead to 24-0 with 12:36 left in the half.

Coastal went for another fourth down conversion on its next drive but the Troy defense held strong again. Watson then heaved a 67-yard touchdown pass to RaJae’ Johnson to extend the Troy lead to 31-0 with 9:47 left in the half.

Coastal finally ended the shutout with an 8-yard touchdown run from McCall with 29 seconds left in the half to cut the Troy lead to 31-7 at halftime.

Coastal got back on the scoreboard to open the second half as McCall threw a 30-yard touchdown pass to Jared Brown to cut the Troy lead to 31-13 after a failed two-point try. Troy answered right back when RaJae’ Johnson made a spectacular one-handed 36-yard touchdown grab to extend the lead to 38-13 with 8:42 remaining in the third quarter.

DK Billingsley then increased the lead to 45-13 on a 3-yard run with 4:49 left in the third quarter. That score came after Troy defensive end TJ Jackson earned a strip-sack of McCall and recovered the fumble deep in Coastal territory.

Coastal managed to score two fourth quarter touchdowns in an attempt to make a rally but when the Chanticleers made one final drive into Troy territory, Troy’s TJ Harris intercepted McCall to seal the win.

“I have to give credit to Coach Sumrall and the whole staff and this guy right here, Gunnar himself,” RaJae’ Johnson said of his big game. “I came here from the jump saying this is a championship team. These guys have been working hard and for us to accomplish this at home is a big thing. I just want to give credit to the other guys on the team, though.” 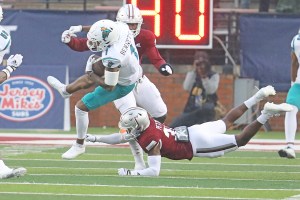 “It feels great but I don think it’s really hit me yet,” Martial said of breaking the Troy record in his final game at Veterans Memorial Stadium. “I just want to soak it all in being in one of my last times sharing the field with these guys. When I lay my head on my pillow tonight I think I’ll be satisfied.”

Troy’s win not only secures the Trojans their seventh ever Sun Belt Championship, but it’s Troy’s first outright title since 2009 and completes an almost unheard of turnaround from the past three seasons with losing records. An emotional Sumrall reflected on the turnaround.

“A year ago yesterday is when (Troy Athletic Director) Brent Jones offered me the job, and I won’t forget that as long as I live, and a year ago today is the first time I had a team meeting with the guys in this room right here about the direction we were about to take this thing,” Sumrall recalled. “There were probably some guys that heard me talk for the first time that were like, ‘This guy’s crazy,’ and I was okay with that. I wanted them to understand things wouldn’t be the same.

“I wanted them to know we were going to work harder than they’ve ever worked and they bought in. I think they bought in because of the relationships, we invest deeply in relationship with our players and we care deeply about them. For them to turn it around as fast as they did is special. I thought we could be good this year, I did, but I didn’t project we would be conference champions. I believed we could be but that takes a lot to go right and a lot did go right.”

Troy still has one more game left this season and will find out its Bowl Game destination on Sunday.