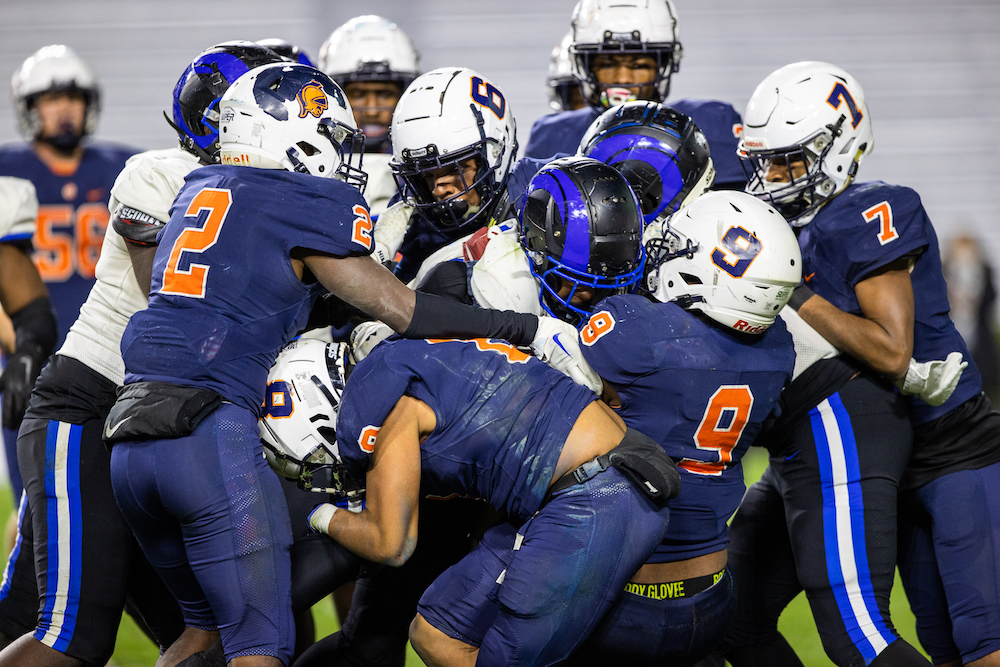 The Charles Henderson Trojans (12-2) saw their Cinderella Season come to an end as Class 5A Runner-Up on Thursday night, falling to the Ramsay Rams (13-2) by a score of 41-20 in the State Championship Game in Auburn.

The stingy Charles Henderson defense struggled to stop Ramsay running back Ashton Ashford – who rushed for nearly 300 yards – and the Trojans turned the ball over twice. The CHHS defense gave up more than 30 points in a game for the first time this season, as well. The CHHS defense, which has lived in opposing offense’s backfields this season, recorded just one tackle-for-loss and zero sacks on the night.

Despite the frustrating loss, Charles Henderson coach Quinn Hambrite discussed his pride in the way his team played all year long.

“Nobody in this room, besides these four men up here, thought we would be in this situation, not a soul,” Hambrite said. “The amount of joy that I have that these men beside me have fought through adversity this entire season, I can’t be more proud of them.”

Hambrite pointed to his senior class as paving the way for future Trojan teams.

“They bought in and we brought in some great coaches that helped us tremendously in the weight room. They believed, if they didn’t believe we wouldn’t have been in this situation. It’s hard to get here without senior leadership.”

One of those senior leaders is linebacker Damien Hart, who said that he hopes that foundation that was set this season drives the Trojans forward.

“Going 2-8 last year and 1-9 the year before, I knew it was time for a change and I knew that Charles Henderson was way better than that,” he said. “We proved it this year. Hopefully we can leave a legacy that just builds and builds and builds. If that happens then this was a success. I love y’all boys, I really do and I hate that I’ll never get to suit up with y’all again.”

Ramsay got things started with an 11-play, 80-yard opening drive that running back Ashton Ashford capped off with a 10-yard touchdown run to put the Rams up 7-0 with 7:32 left in the first quarter.

Charles Henderson answered right back with a one-play scoring drive when quarterback Parker Adams threw a 64-yard touchdown pass to Jy’won Body to tie the score 7-7 with 7:13 left in the opening period.

Ramsay returned the ensuing kickoff 67 yards deep into Charles Henderson territory but the Trojan defense stood tall and forced a turnover on downs. The two sides remained deadlocked at 7-7 going into the second quarter.

Charles Henderson took its first lead of the night, 10-7, with a 36-yard field goal from Nik Peerson to open the second quarter, and then the Trojans recovered a pooched kickoff only for it to be overturned due to a kick-catch interference penalty that gave Ramsay the ball near midfield. In high school football rules, a kicking team cannot touch the ball before it hits the ground or it is a penalty, giving the receiving team the ball where it’s touched.

Ramsay capped off a 7-play drive with a 22-yard touchdown run from Ashford to retake the Ram lead 20-13 going into halftime.

In the first half, Ramsay rolled up 176 yards on the ground – Ashford with all of it – and 217 total yards, while Charles Henderson managed 145 yards of offense with 64 yards coming on its first play. The Trojans were 0-for-5 on third downs in the half, while Ramsay went 5-for-7 in the half.

Charles Henderson got the second half off on a bad foot again as Adams was intercepted on the first play of the half. Ashford then scored on an 8-yard run to extend Ramsay’s lead to 27-13 with 7:47 left in the third quarter.

The Trojans drove to midfield before bogging down and facing another fourth down. This time, however, Peerson faked a punt and picked up a first down. On the next play, Adams lofted a 34-yard touchdown pass to Boyd to cut the Ramsay lead to 27-20 with 4:15 left in the period.

Ramsay drove down to the Charles Henderson 11-yard line as the fourth quarter began but the Trojans forced a turnover on downs. Adams was then intercepted on the very next play by Ramsay’s Jermaine Foy, who returned it 31 yards for a touchdown to extend the Ram lead to 34-20 with 10:42 left.

After a Charles Henderson three-and-out, Ramsay returned the punt 45 yards and, a few plays later, Ashford scored his fifth rushing touchdown of the night on a 4-yard run to extend the lead to 41-20 with 4:45 left.

Charles Henderson managed just 216 yards of offense on the night, while Ramsay rolled up 390 yards with 310 coming on the ground. The Trojans also turned the ball over twice and went just 1-for-11 on third downs, while the Rams converted 7-of-10 third down attempts.