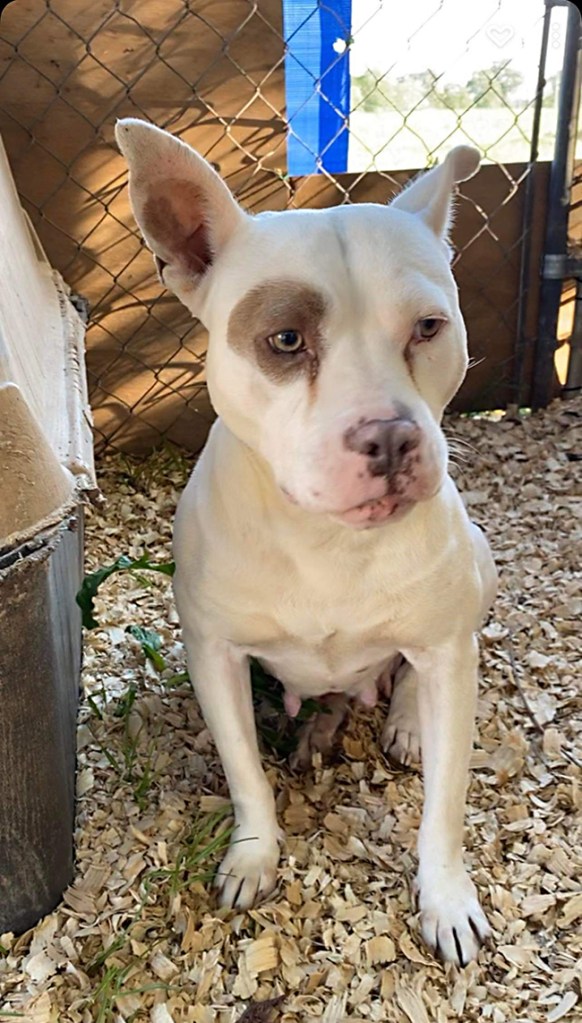 Contributed Photo Clover lost her life as a result of storm damage at the troy Animal Rescue project.

Troy Animal Rescue Project near Spring Hill was damaged in the early morning hours Wednesday by severe winds that accompanied the storms that crossed the area.

Two dogs were injured as a result of their cages being knocked over by the strong winds.

Robby Riness, center manager, said “shy, sweet Clover,” a bulldog-mix, lost her life as the result of her injuries. Mia, a husky, suffered a broken leg.

“We were fortunate that other animals weren’t injured when the cages were blown over and knocked off their concrete slabs,” Riness said. “All of us here are sadden by the loss of Clover. She was kind and gentle and everyone loved her.”

What appeared to have happened with Clover was that the door to her cage was knocked open, Riness said.

“She got out and went into the next cage. There, she got caught somehow and, because her leg was broken, she couldn’t scratch loose. She had broken bones, blood loss and was in shock. As hard as it was, having her euthanized was the humane thing to do.”

Riness and Jillian Kelly, center worker, said thoughts among the volunteers are for a memorial of some type for a favorite pup among the 160-plus dogs that are sheltered at the Troy Animal Rescue Project.

Riness said, in addition to ages being knocked over and off their slabs, the strong wind blew the roof off a storage building and knocked down trees and electrical cables.

“We’ve got damage, just how much, we’re not sure yet,” he said. “Tiffany Howington is the director and she is dedicated to all the animals and to the project.  We have almost as many cats as we have dogs. We have Guinea pigs, and, every now and then, a farm animal or two. In addition to the animals here at the project, we have animals in foster care. At Troy Animal Rescue Project, we care about all the animals. We will get things back the way they need to be.”