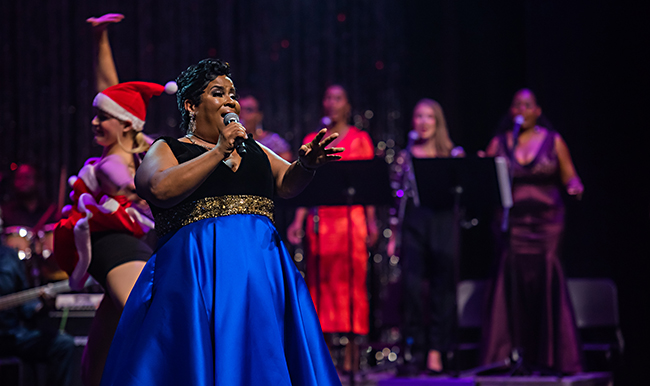 Photo by Johna Enfinger The Sheila Jackson and Friends Annual Christmas Concert” will be held at 7 p.m. Friday, December 9, live at the Claudia Crosby Theater.

The Claudia Crosby Theater on the campus of Troy University will, once again, be alive with the sounds of Christmas when the Troy Arts Council presents the “Sheila Jackson and Friends Annual Christmas Concert” at 7 p.m. Friday, December 9.

“It’s good to be back ‘Live at the Crosby Theater,’” Jackson said, “The last time for the Christmas Concert with friends was 2019. That seems like a long time ago. We enjoyed the virtual performances in 2020 and -21, but there’s nothing like all of us being together at Christmastime.”

The “Shelia Jackson and Friends Concert” will bring together many of those who were “together” for the first Christmas Concert 18 years ago.

“Don Crapps was president of the Troy Arts Council and the Christmas concert was his idea,” Jackson said. “It was just the three of us back then, Christine Barron, Kathy Lightfoot and me. Don was pleased and he would be especially proud to know that we’re still celebrating the coming of Christmas together as a community.”

The concert will feature holiday music including the carols of Christmas, joyful hymns, songs with winter themes, children’s songs and sentimental ballads.

Emcees for the event will be Willie B. Williams and‑ Tonya Terry.

Popular vocalists, Marge Simmons and Tommy Newman, will join Jackson for a couple of specials, including “Heat Wave,” which is made-to-fit for the concert.

“We’ll have a special selection by the gospel choir but I don’t want to give away much of the program,” Jackson said. “I do want to say how much I enjoy this concert. It’s for our community and I’m especially excited that we will have a large group of young people in the audience. Thanks to TAC President Dr. Dave Camwell and the council for continuing to bring our community together at this season of the year. When the community and the arts come together, that makes a positive statement about our people and this place we call home.”