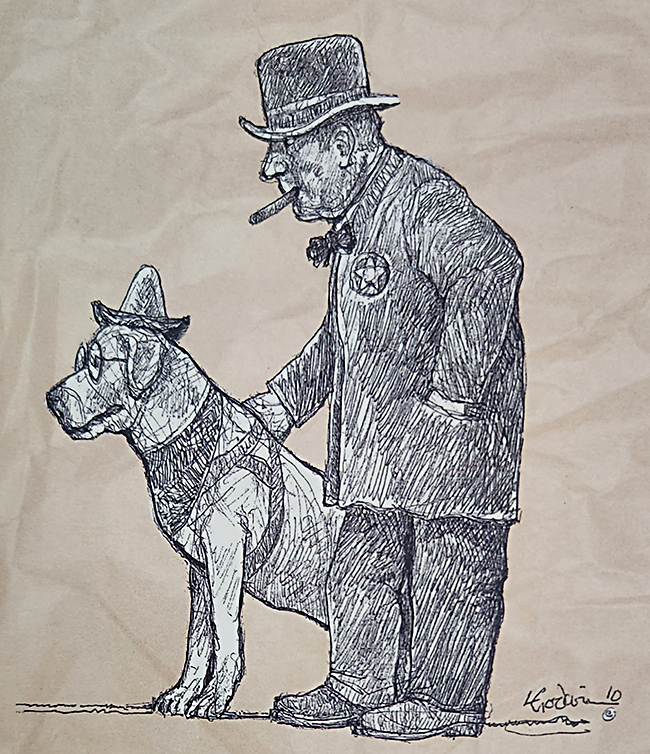 This is a story that should start with “Once upon a time,” because it’s that kind of story. But it doesn’t start that way because that might imply that it’s a fabrication of someone’s imagination. And it’s not.

The story of Joe Leverette is absolutely true. Joe is an Alabama legend and he will live on as long as there is anyone who will listen to his story and believe.

Joe Leverette came into this world unwanted. His mama abandoned him soon after he was born and his pap was unknown. As unlucky as Joe’s life began, he went on to live as if he had been born with a T-bone steak in his mouth.

Ask most anybody in Brundidge who has a little gray in his or her hair about Joe Leverette and they will smile at the thought of him.  Joe, a runt of a bulldog, was the assistant police chief in Brundidge for 11 years. Howell Leverette was the chief. The legend tells us that Joe took such a big bite out of crime that bad guys were more afraid him than of his chief.

Tales are still told about Joe’s heroics, about how he packed a pistol and sharpened his teeth on a grinding rock.

People still talk about how he broke up skins games in the dark of night, raided Josie moonshine stills, nipped the backsides of banks robbers, collected bounty from killing wharf rats, saved a little girl from drowning and two ol’ ladies from a burning house. They talk about how he fought a mean monkey and snapped a 10-foot rattler’s head off. It is often told that Joe butted heads with a charging bull and won.

One day, a salesman stopped in town to get one of Miss Anderson’s world-famous hamburgers. The café was packed and everybody was talking about Joe and his heroics. The salesman worked  for a world famous dog biscuit company and he saw the potential for big sales with Joe as its spokesperson.

He made the chief and Miss Laura a good offer for Joe to represent the dog biscuit company. A few weeks later, a big truck-load of biscuits arrived for Joe. When he crunched down on one, he spit it right out. The biscuit company came and set Joe in the middle of a pile of dog biscuits wearing his hat and holster and gun. They said for him to smile, “Yum! yum!

Joe wouldn’t eat the dog biscuits, so Mr. Howell and Miss Laura bow-wowed out of the deal.

Joe was happy and content with Miss Laura’s biscuits and chicken feet.

Time marched on and one day in 1943 Joe died of old age. It was a sad day in Brundidge and all Oak Street mourned.

Years later, new owners lived in Joe’s house. One morning the young wife was baking biscuits and she heard a soft, wistful puppy sound. She waved it off but, from that time forward, every time she baked biscuits, she heard the puppy sound.

In later years, another couple moved in and, every time they had fried chicken, a barking sound would fill the house. They said at night, they often heard the soft pattering of dog’s feet coming down the hallway from the kitchen.

On Halloween night, children will scamper at the sound of a barking dog. Joe, perhaps?

Inside the house, the yellow shadow of a bulldog can be seen through the windows as it goes from room to room, perhaps in search of one of Miss Laura’s biscuits or a fried chicken foot.