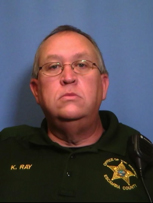 Kevin loved life and could always be heard cheering for his alma mater- the Troy University Trojans!! He was a Sherriff’s Deputy for over 20 years in Escambia County, Florida.  The apple of his eye was his beloved daughter, Lauren Ray, who would travel all around riding and competing with her equestrian team. He enjoyed spending time with her and was her greatest support!  He will be missed by all who loved and knew him.

He was predeceased by his grandfather, Henry Gibson; and his paternal grandparents, Carter & Johnnie Ray.

In lieu of flowers, memorials may be made to Troy Bank & Trust in memory of Kevin Ray for his daughter’s medical expenses.

They remained a power couple until Carolyn’s untimely death in 2017. Family history repeated itself as Marvin set out on a career as a Methodist preacher and Carolyn a teacher.

Marvin was called to ministry at the age of 19. He graduated from the Emory University Candler School of Theology in 1966. Upon his ordination, he began his service to the Alabama West Florida United Methodist Conference. Marvin served the Perote Charge, Goshen Circuit and Seale/Alexandria charge. He and Carolyn were grateful for the early foundation those churches gave. The Seale/Alexandria charge did and will always remain very special to them.

Upon the entrance of the United States into the Vietnam War, Marvin felt a strong calling to serve his country. He took a different ministry route and in 1967 volunteered for duty in the United States Army. Marvin felt then, as he would tell you now, no one needs God’s grace, guidance and discernment more than a solider. Marvin began his military career at Fort Hood, Texas assigned to the 26th Infantry Division “Blue Spaders”. From Fort Hood, he volunteered for assignment in Vietnam. After returning from war, Marvin held assignments at Fort Bragg, North Carolina; Kaiserslautern and Karlsruhe, Germany; Fort Wadsworth, New York; Fort Polk, Louisiana; Fort Monmouth, New Jersey; Fort Stewart, Georgia; Camp Red Cloud, South Korea; Fort Rucker, Alabama and Fort Gillem, Georgia. He held positions as Brigade Chaplain, Director of Education US Army Chaplain Board, Installation Chaplain and Installation Staff Chaplain. Marvin’s final assignment was as the Chaplain to the First United States Army Fort Gillem, GA. While there, he led and trained over 2,000 Chaplains and Chaplain Assistants involving 27 states and 3 US territories. Over his military career, Marvin learned to drive tanks, earned his jump wings, his German jump wings and ministered to the masses. Marvin retired as a Colonel from the US Army after almost 31 years of service.

Carolyn had always claimed she would never marry a soldier, a preacher or a farmer (did I mention Marvin farmed pine trees and drove tractors for fun). God had other plans!

Upon his retirement from the Army, he returned to the Alabama West Florida United Methodist Conference and became the Executive Director of Blue Lake Methodist Assembly. This is where he became known as “Chappy”. He greatly loved Blue Lake and the people who visited and worshipped at this special place. He especially loved his summer counselors. Those young people filled him with such joy. He and Carolyn split their time between Enterprise and Blue Lake during his years as Executive Director. He retired from Blue Lake and the United Methodist Church in 2009 and was greatly honored when the main gym at Blue Lake was name Vickers Gym.

A proud TROY Alumni, Marvin played in the University Alumni and Community Bands. In 1983, Marvin was named Troy State University Alumni of the Year. An avid Harley rider, he enjoyed riding with church friends and the Patriot Guard. He was active in the Sons of the American Revolution serving as Alabama State and Wiregrass Chapter Presidents. He faithfully attended the First United Methodist Church of Enterprise until his health no longer allowed him to do so.

He was married to Carolyn for 55 years. The lights of his life were their children and their spouses Kristin and Jason Capstraw and Keron III and Tracey Vickers. His greatest joy was being “Chappy” to his four grandchildren Audrey and Alan Vickers and Troy and Emery Capstraw.

Marvin passed away on October 19, 2022 after suffering from Lyme Disease for over a decade. He left this world peacefully; surrounded by the laughter of family and friends. To those who knew him, this was fitting. He should be remembered as a charismatic man with the most infectious laugh who loved everyone.

Marvin is survived by his brother Perry (Elizabeth) Vickers, his sister Claire (Malon) Murphy, his sister-in-law Ann Ammons, his children, grandchildren and nieces and nephew. He was proceeded in death by his wife and parents.

In lieu of flowers, the family asks you make a donation to the Vickers Gym at Blue Lake United Methodist Assembly Andalusia, Alabama in Marvin’s honor.

He is preceded in death by his parents: Isaac and Verna Thompson.

Mr. Thompson served as a banker in Pike County for 30 years. Following his retirement from banking, he became an Alabama real estate broker. He was an active member of Brundidge United Methodist Church as well as a member of the Brundidge Rotary Club.