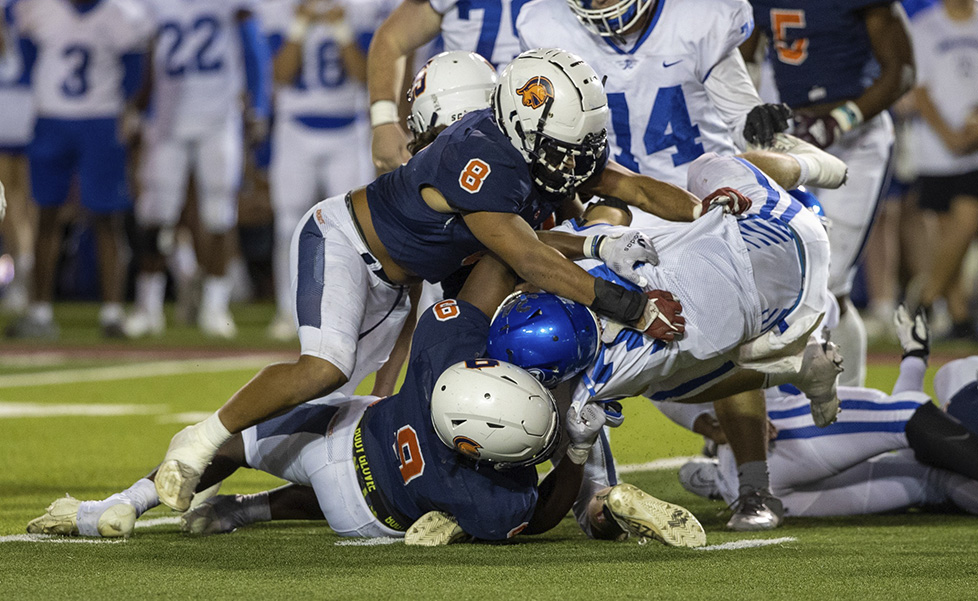 Damien Hart (8) and the Trojan defense will have their hands full with Eufaula this Friday. (Photo by Dan Smith)

This week is also the first road game of the season for the Trojans after starting the regular season off with six straight home games in the friendly confines of Veterans Memorial Stadium. The hospitality felt at Eufaula’s Tiger Stadium will be much different, however. Eufaula is 11-3 at Tiger Stadium over the past three seasons and hasn’t lost more than one home game in a season since 2018. The Tigers have a 2-1 home record in 2022 with wins over Carroll and Stanhope Elmore along with an overtime loss to 2021 Class 5A State Champion Pike Road on Sept. 16.

The Eufaula offense has been startlingly effective in 2022, averaging 34.7 points per game and scoring 43 or more points in three of the last four contests. Quarterback Copeland Cotton has completed 98-of-162 pass attempts this season for 1,250 yards, 11 touchdowns and three interceptions. In his past three games, Copeland has amassed 693 yards and seven touchdowns with no interceptions. His favorite targets are Arelious Slaughter (36 catches, 389 yards and four touchdowns) and Antron Mitchell (26 catches, 437 yards and four touchdowns).

The Tigers also boast a trio of FBS commits on their roster, including 6-foot-3-inch, 230-pound outside linebacker Tre’Mon Henry, who will be playing college football at Southern Miss. Also, 6-foot-6-inch, 295-pound lineman Patrick Screws is committed to Georgia Tech, while 6-foot-3-inch, 220-pound defensive end Yhonzae Pierre is committed to Alabama.

The Trojans have been no slouch on offense this season, either, averaging 28.8 points per game. In fact, Charles Henderson is just 21 points away from surpassing its point total for the entire 2021 season. Quarterback Parker Adams has been incredibly efficient this season, totaling 1,265 yards, 13 touchdowns and just three interceptions on 75-of-122 passing. Athlete Jy’won Boyd has been his “go to” target with 25 catches, 519 yards and seven touchdowns, while Stephon Mosely also has 17 catches, 304 yards and two touchdowns.

The Trojan running game has also amassed 930 yards and 10 touchdowns, averaging 155 yards per game, this season. Zach Coleman leads the way with 338 yards and six touchdowns on 63 carries, while Antonio Frazier also has 274 yards and two touchdowns. Boyd also has 198 yards and a touchdown on the ground.

Charles Henderson and Eufaula will kickoff at 7 p.m. on Oct. 7 at Tiger Stadium in Eufaula.