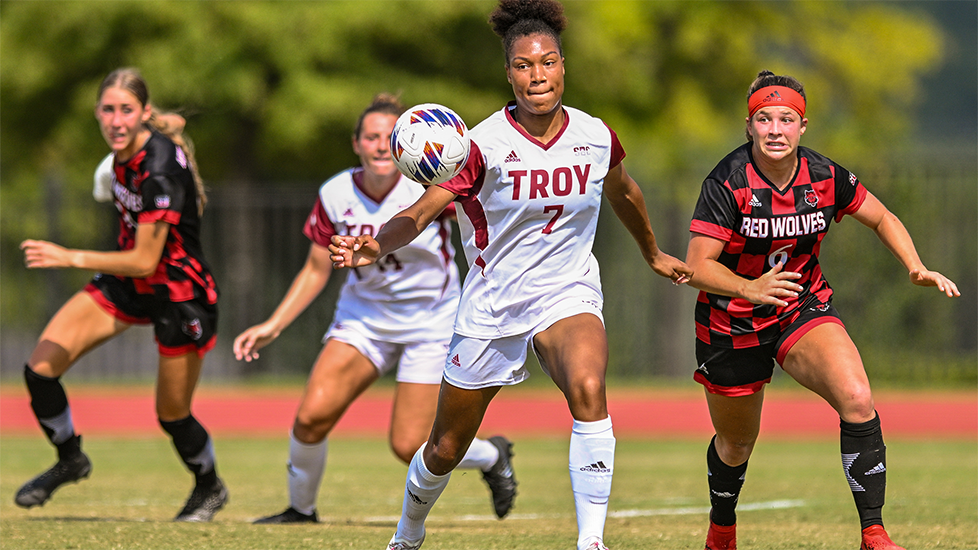 Melissa Kuya-Strobel (7) scored her first goal of the season against Georgia State on Sunday. (Photo courtesy of Troy University Athletics)

The match also broke an offensive draught for the Trojans. Coming into the match with GSU, Troy had scored just one goal in the past three matches, all Sun Belt matchups.

Troy earned its fastest goal of the entire season when Halee Bradbury earned her first career goal just 3:08 into the game to give the Trojans an early 1-0 lead. Troy hung on to that lead for the next 21 minutes until Georgia State’s Elena Diaz tied things up 1-1 on a penalty kick.

Later, Taytum Terrell’s shot attempt off a corner kick was blocked but fell right back to Troy teammate Melissa Kuya-Strobel, who earned her first goal of the season to put Troy back ahead 2-1 with 57:07 of match time elapsed.

With 71:32 of game time elapsed, Troy’s Ashley Rainho scored her first goal as a Trojan when Panther miscommunication led to the goal being left wide open to give Troy a 3-1 lead.

Georgia State managed to close the gap to 3-2 at the 78:29 mark in the match on a Bree Barley goal but couldn’t tie the score in the final 12 minutes of match time.

Rainho, Bradbury and Kuya-Strobel all earned goals for the Trojans, while Terrell and Gabrielle Chartier earned assists. Lindsey LaRoche had one save on the afternoon at goalkeeper.

“Super proud of the girls and their effort this afternoon,” Troy coach Robert Lane said. “I thought we did a great job of trying to limit the dangerous chances that Georgia State is capable of creating. Overall, we were a bit more dangerous in the final third, and credit to our group for being a bit more clinical with those chances. Again, great response, and now we’re on to the next one.”

Troy will try to keep its momentum going on Thursday at home against Old Dominion at 7 p.m.