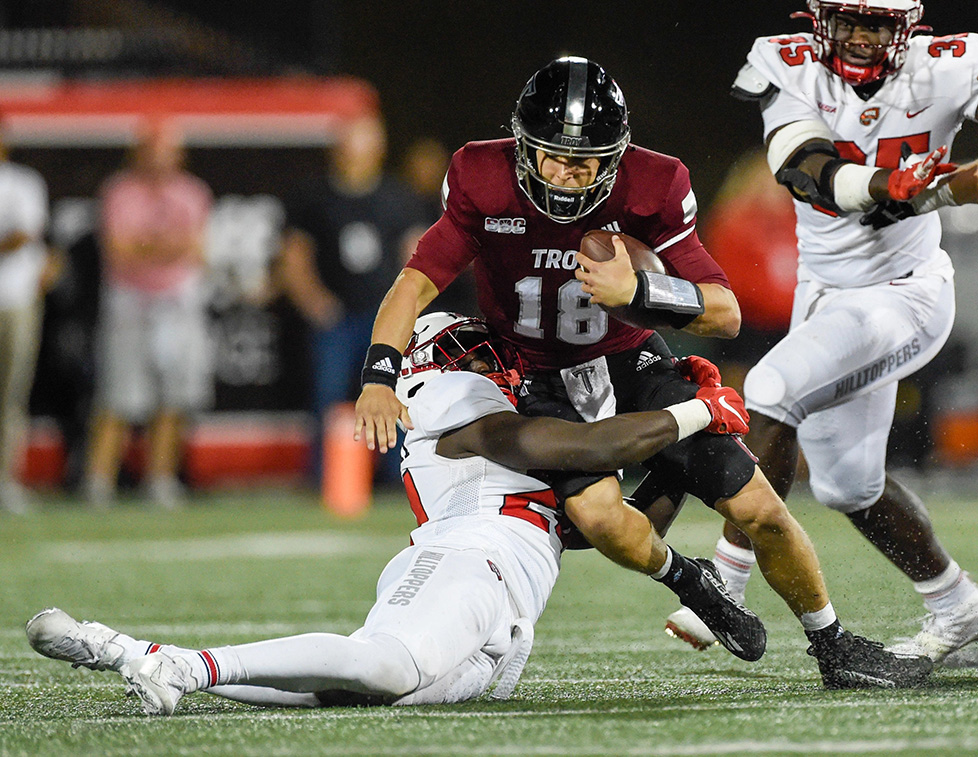 At his weekly press conference on Monday, Troy football coach Jon Sumrall gave an update on a number of injured players going into this week’s home game with Southern Miss.

Starting quarterback Gunnar Watson left Saturday’s game with an injury in the third quarter and was replaced with backup – and Western Kentucky transfer – Jarret Doege for the rest of the game. While Sumrall didn’t specify Watson’s injury, he said that he could have possibly reentered the game and called his status for this week as “questionable but probable.”

“We’ll know more about what the rotation (at quarterback) is or who comes out to start the game maybe later today or tomorrow,” Sumrall said. “Gunnar maybe could have (reentered the game) but we were acting with an abundance of caution.”

“There’s no change with Luis Medina and Jayden but Deyunkrea is looking better, but we still don’t know if he will be available this week,” Sumrall said. “I’m confident about him playing next week but I’m still unsure for this week.”

KJ Robertson – who suffered an ankle injury earlier this season – left Saturday’s game with a leg injury against Western Kentucky, as well. Sumrall said that he “looks good” and he’s probable to be in the lineup this Saturday.

The recent injury that seems to be the most doubtful for this week is cornerback Caleb Ransaw, who took a shot to the head/neck area in the second half against Western Kentucky.

“I treat every young man in our program like one of my own (children) and I’m never going to push them (to play) before they’re ready,” Sumrall emphasized. “With heads and necks I’m going to be more cautious. If they clear Caleb Ransaw today I’m still not going to let him play. I’m just not going to allow it out of an abundance of caution for him.”

“I’m really proud of this guy,” Sumrall said of Barber. “Better people make better players and Jabre does everything you ask of him the right way day in and day out with a great attitude.

“He did a couple of things around the community last week and what probably got him in the win was that we arrived back home from Bowling Green at 5 a.m. and he stayed and helped clean up the buses and make sure there was no trash left. That’s really a testament to his character.”

“Kyle affects our team in so many ways, some on the field but many off the field,” Sumrall said. “He has great work ethic, a tremendous attitude and is as good of a human as you would want to be around.”