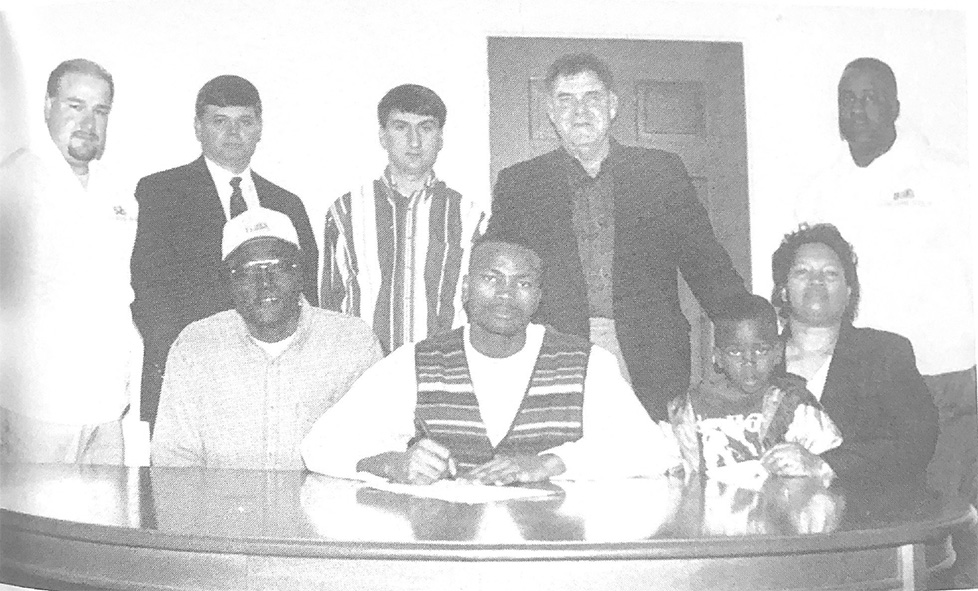 Brundidge native and Pike County High School graduate Quincy Jackson will have his name etched in the history books of East Mississippi Community College’s Sports Hall of Fame next week.

It was announced this week that Jackson, an All-American receiver at EMCC, would be inducted into the EMCC Sports Hall of Fame. 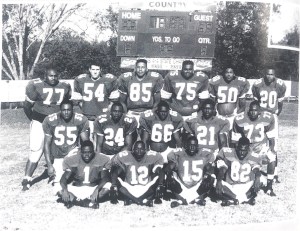 Jackson was a part of the Pike County football dynasty of the 1990s and was a member of a squad that won back-to-back Class 4A, Region 3 Championships in 1993 and 1994.

Jackson was an all-state defensive back at PCHS but played quarterback, receiver, running back and other positions. As a result, he was recruited by colleges across the country at various positions, but wide receiver was his love. EMCC was the first school to offer him the chance to play receiver full-time.

“That’s absolutely why I took the (junior college) route. I was going to be able to play a single position full-time for the first time and be able to work on that and it allowed me to really hone my craft,” Jackson recalled. “That was the position I enjoyed the most and I loved playing the most.” 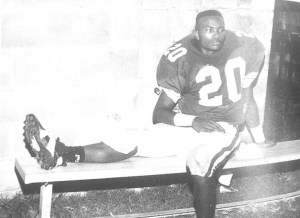 EMCC – known primarily now for its appearance on Netflix’s “Last Chance U” series – is located in Scooba, MS, which Jackson said reminded him of home.

“To be able to leave a town like Brundidge to go to a JUCO where the town was like Brundidge was a win-win for me,” he said. “I still felt like I was home minus the family.”

At EMCC, Jackson became an All-American receiver and finished his sophomore campaign with 43 catches for 1,170 yards and 12 touchdowns. After gaining nearly 1,900 yards and 20 touchdowns as a receiver at EMCC, it was time to take his talents to Division I football.

Alabama originally recruited Jackson out of high school to play safety but after the success he had at EMCC, Jackson was once again recruited by Alabama, this time at receiver. It paid off and Jackson was part of a group of players that helped rebuild a Crimson Tide program that had fallen on hard times in recent years.

In 1998, Jackson caught 48 passes for 621 yards and four touchdowns and earned an invitation to play in the Senior Bowl. Jackson is one of numerous examples of players starting their career at the JUCO level and then becoming a star elsewhere. Jackson said he would advise any player with the opportunity to do the same to not look past a JUCO opportunity. 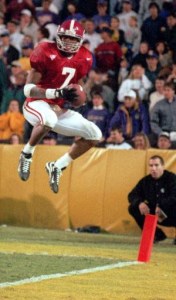 Jackson went on to be a star receiver at both EMCC and Alabama.

“I would say if you feel like you need to still improve on your game and you want to be able to go in and prove yourself early on, JUCO is the best route,” Jackson said.

Following his stellar career at Alabama, Jackson had a brief stint with the Cincinnati Bengals in the NFL in 1999. His pro football career didn’t stop when he was released from the Bengals, however.

Jackson went on to play for eight seasons professionally in various leagues. He got his first opportunity to play for the Albany Firebirds of the Arena Football League (AFL), and ended his rookie campaign with 68 catches for 945 yards and 16 touchdowns. That led to a contract back home with the Birmingham Thunderbolts of the upstart XFL in 2001. Jackson hauled in 45 catches for 531 yards and a team-leading six touchdowns with the Bolts and then headed to the Canadian Football League (CFL).

Jackson played four seasons in the CFL with both the Edmonton Eskimos and Saskatchewan Roughriders. His CFL career ended with 102 catches for 1,397 yards and eight touchdowns. He was also a part of the 2003 Eskimos squad that won the Grey Cup Championship.

In 2008, Jackson played for the Arizona Adrenaline of the American Indoor Football League (AIFL) and earned All-AIFL honors after catching 116 passes for 1,197 yards and 30 touchdowns. Jackson credits his time in Brundidge for why he was able to play professionally for so long.

“I didn’t think I would be able to really last that long, honestly,” said Jackson. “Having a short NFL career, a lot of people give up but I love the game of football so much. 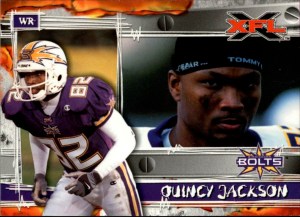 Jackson was a member of the Birmingham Bolts in the XFL in 2001.

Jackson’s football career paralleled another Pike County star, who just so happens to also be family. Jackson’s first cousin is Cornelius Griffin, who went on to be an all-state lineman alongside Jackson at Pike County before becoming an All-American at the JUCO level. In fact, Jackson’s EMCC played Griffin’s Pearl River Community College, which Jackson called a highlight of his JUCO career. The pair went on to play together at Alabama, as well. Griffin also had a long professional career, playing for both the New York Giants and Washington Redskins.

Griffin is now a part of Mark Hurt’s – another Pike County grad – coaching staff at Pike County, which has made Jackson proud.

“We looked forward to Friday nights in Pike County and it’s starting to feel like that again,” Jackson emphasized. “It’s awesome for a lot of those guys to go back and be a part of that again, especially those established faces, to help what’s going on today. It was much needed I think.”

Jackson now resides in the Birmingham area and is married to a Birmingham native, Aquilla Jackson. The pair have two daughters, Laila and Leigha, and Jackson jointly operates a landscaping business in the Bessemer area. On Thursday, Sept. 29, Jackson will be back on campus at EMCC for his induction ceremony during the pregame and halftime of EMCC’s game with Northwest Mississippi Community College.