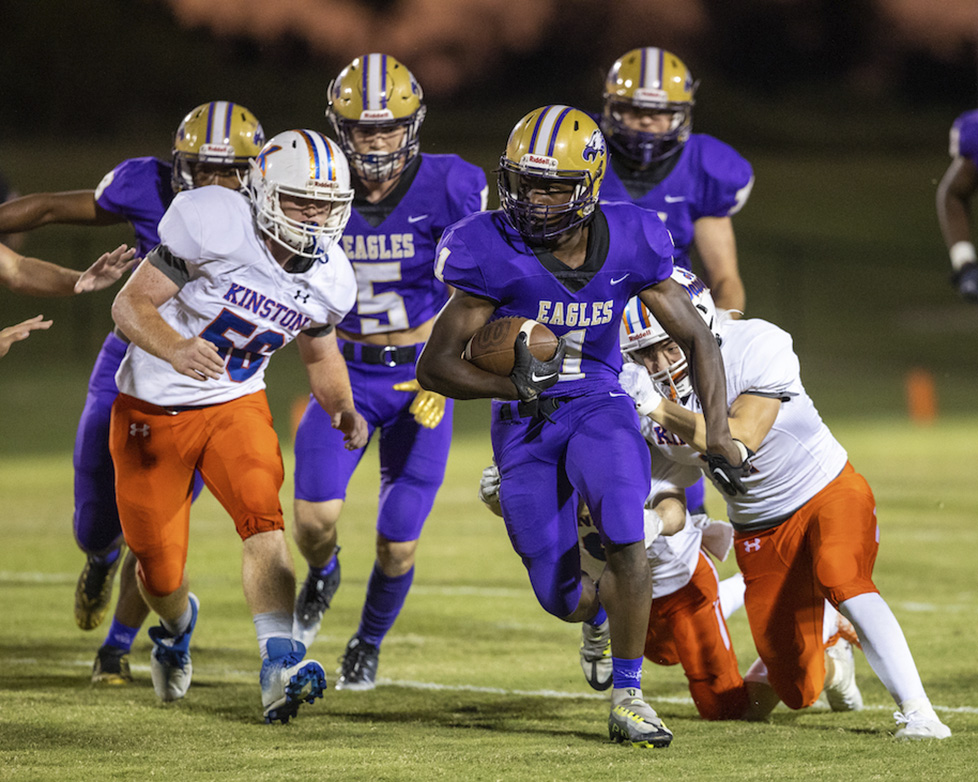 Andrews rushed for 212 yards on 15 carries while McClure gained 123 yards rushing and a TD, while catching two touchdown passes for 32 receiving yards.

Improving to 4-2 on the season, Head Coach Don Moore was pleased not only with the offensive production, but the overall team performance as the Eagles are off to a strong start. Last season Goshen had only one win and now have four through six games.

“We challenge our guys to come out fast and play four quarters,” Moore said. “I’m just super proud of our guys. It’s good to get a Homecoming victory in front of the group, and I am just happy for our program right now. We try to take it one game at a time. We are going to celebrate this win tonight and get back to work tomorrow.”

Goshen got on the board first on a 1-yard run by McClure, with quarterback Andrew Galloway connecting with Tyler McLendon for a two-point conversation, and the Eagles led 8-0.

Andrews scored his first touchdown of the night on a 1-yard carry for a 14-0 lead, and put his team up 21-0 on a 78-yard sprint, and Christopher Thompson was good on the extra point attempt with 9:00 remaining in the second quarter.

Kinston, falling to 1-4 on the season, scored its first touchdown on a Jeb Crosby run of 38 yards, and the extra point by Marcus Free was good to cut the lead to 21-7.

Goshen scored on its next possession with quarterback Stamey finding McLendon in the end zone for a 26-yard reception, and the PAT by Thompson made the score 28-7.

Andrews put Goshen ahead 35-7 on a 24-yard run, and Stamey threw a 6-yard touchdown pass to McClure to put the Eagles up 42-7 after the kick to end the first half of scoring.

The Eagles went up 49-7 on a pass from Stamey to McClure for a 26-yard TD, and Kinston scored again in the fourth quarter when Dalton Smith of Kinston took a Goshen fumble and raced 24-yards for the TD to cut the lead to 49-13.

Andrews scored on a 43-yard touchdown with 10:46 to play in the game, and the extra point by Johnson was good to make the score 56-13.

Braxton Jones scored on an 11-yard touchdown to put Goshen up 63-13, with Johnson adding the PAT.

Kinston scored its final touchdown with :55 remaining in the game on a 26-yard scramble by Robert Andrew Connor, to make the final 63-19.

Goshen is on the road at Barbour County next Friday for a Class 2A, Region 3 matchup.