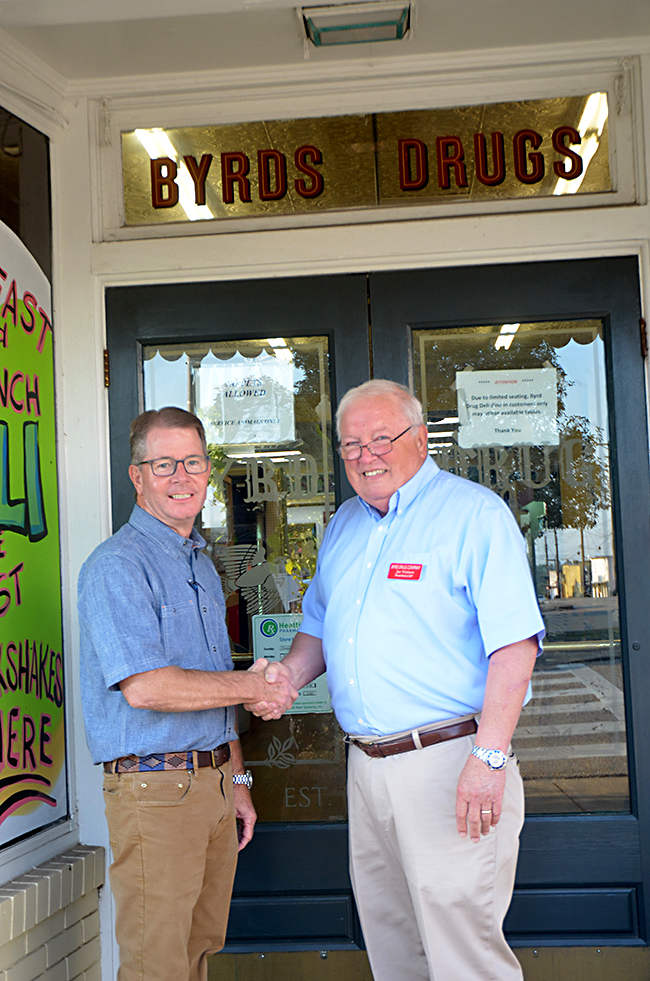 Jaine Treadwell | The Messenger Although there is no “sold” sign on Byrd Drugs, word is out around town. Joe and Evenly Watson have sold Byrd Drugs to Buy Rite Drugs, an independent pharmacy company based in Sneads, Florida. The name will remain the same as well as the friendly, hometown service.

Joe Watson walked into his home and said to his wife, “It’s time.”

“I have always been told that you know when it’s time to retire,” Joe Watson said, with a smile. “I knew ‘that’ day that it was time.”

Watson said there was nothing significate about that day — nothing stressful or eventful. He just knew it was, at long last, time.

The Watsons have owned and operated Byrd Drugs for 54 years. Joe and Evelyn purchased her family’s pharmacy business and they have been dedicated to serving Byrd Drugs’ customers just like they are family.

Watson, as the pharmacist, knew when “it was time” but he also realized that the name and the tradition had to continue.

“Byrd Drugs. It had to remain Byrd Drugs and with the soda fountain,” Watson said with smile. “And, the new owner(s) would have to provide the same friendly atmosphere and dependable service that Byrd Drugs has always provided.”

Watson was unaware of the man who walked into Byrd Drugs and left knowing “that’s the store we need.”

The visitor to Byrd Drugs was Ron Pickens of Sneads, Florida, who is the district manager for a group of guys who own Buy Rite Drugs, an independent pharmacy with 12 stores in Florida and Alabama.

“Byrd Drugs is lucky number 13,” Pickens said with a smile. “Buy-Rite Drugs is dedicated to the same quality service and to providing the hometown atmosphere of Byrd Drugs. That is what Joe, Evelyn and his staff have been providing for 54 years and that will not change.”

Watson said the people of Troy and Pike County have always been supportive.

“People have supported us over these many years and we owe our appreciation to all of them for making us successful,” Watson said. “We have had great employees who were and are like family. I would never have thought of selling to anyone who was not dedicated to providing hometown service to our hometown people.”

Joe and Evelyn Watson are planning some trips they have not had time to take and spending more time with family and friends. For sure, they’ll stop by Byrd Drugs every now and for a BLT and a vanilla shake.